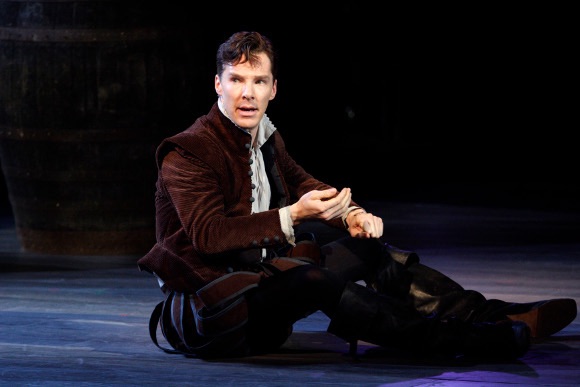 Benedict Cumberbatch in "Rosencrantz and Guildenstern Are Dead" for National Theatre 50th anniversary (Photo: Catherine Ashmore)
As per usual, Benedict Cumberbatch has been everywhere lately – filming a new Sherlock special, getting cast in a Marvel movie, earning a Best Actor nomination for his turn as Alan Turing. His schedule doesn’t look to be slowing down any in 2015, and one of the most highly anticipated items on his docket is his impending West End turn in Shakespeare’s Hamlet this summer.

The production – which is somewhat highly anticipated by Cumberbatch’s legion of fans worldwide, it seems safe to say – is already the fastest-selling ticket in London theater history. In fact, the entire three-month run, scheduled for August to October of this year, sold out completely in the better part of 24 hours after tickets went onsale to the general public last summer. However, all is not lost if you’re still keen to see the production – a limited number of £10 ($17) tickets will be made available for each performance on the day of the show.

However, for those who don’t fancy a jaunt to London this Fall – or don’t want to risk not snagging a ticket once they get there – don’t fret. You’ll still have the chance to see Cumberbatch take on the Bard’s greatest role for yourself, thanks to the lovely folks at National Theatre Live.

The program regularly offers in-cinema screenings of popular theatrical productions around the world – such as Tom Hiddleston’s recent turn in Coriolanus, Bill Nighy in Skylight or Helen McCrory in Medea. (They also regularly screen Cumberbatch’s 2011 performance opposite Jonny Lee Miller in Frankenstein, so keep an eye out for that if you’ve never seen it.)

Given the global interest in this particular production, it’s not terribly surprising that it’s already determined that Hamlet will get a NT Live theater broadcast. But it’s nice to see the news confirmed from the source, officially:

A screening of the filmed performance will be broadcast in cinemas internationally on October 15. Tickets will go onsale March 16 via the NTL website, where you will also be able to search for participating locations near you.  Keep in mind that not every cinema will screen the production on the designated “live” date and it’ll be important to check with the local theaters that often feature NT Live productions in your area.

For DC-area folks, you can generally count on the Shakespeare Theater for NT Live screenings, but their schedule only currently goes to the beginning of July. However, given that the theater also has a regular schedule of plays, it doesn’t always keep to the advertised live date. It’s probably worth it to keep an eye on Fathom Events listings in the meantime, too.

In short: Get excited, it seems obvious that Cumberbatch is going to be a fantastic Prince of Denmark! Are you looking forward to this?