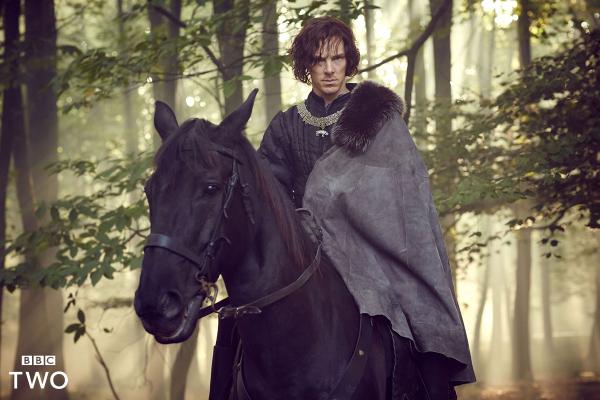 Benedict Cumberbatch as Shakespeare's King Richard III. (Photo: BBC via Twitter)
The Wars of the Roses, the highly anticipated follow up to Shakespeare mini-series The Hollow Crown started filming in late September and, happily, the kick off to official production has resulted in some more exciting casting announcements as the massive cast of Yorks and Lancasters gets fleshed out more fully.

Plus, we got our first official look at Sherlock star Benedict Cumberbatch in his lead role as hunchbacked King Richard III. Huzzah, indeed.

The Hollow Crown sequel is subtitled The Wars of the Roses and adapts Shakespeare’s other set of history plays into a single narrative, streamlining the three parts of King Henry VI into two, and adding Richard III on at the end of it, to tell the story of the rise of the Tudor dynasty and the fall of the Plantagnets. (The original Hollow Crown covered Richard II, Henry IV Pts. 1 and 2 and Henry V.)

Cumberbatch  is play the ill-fated King Richard III across all three plays (though his character doesn’t appear much in the Henry VI trilogy to be honest), Previous announced members of the star-studded ensemble, include  none other than the great Dame Judi Dench (yes, really) as Richard’s mother Cecily, the Duchess of York, Downton Abbey star Hugh Bonneville as Humphrey, Duke of Gloucester, Keeley Hawes as Queen Elizabeth and Tom Sturridge as King Henry VI. Sophie Okonedo was previously named to play Margaret of Anjou.

But, that’s not all. (There are a lot of characters in these plays, don’t forget.) BBC Two has announced even more additional casting, including a couple of names that are going to make fans of British telly pretty excited.

Cumberbatch’s Sherlock co-star Andrew Scott has been announced to play King Louis, further proving that there are, at most, a dozen British actors to cast in things. (If the rest of this list weren’t enough to convince you!)

In other Hey It’s That Guy casting: Harry Potter’s Michael Gambon will play Mortimer, Life on Mars’ Philip Glenister is Talbot, Ben Daniels (who can currently be seen in the second season of The Paradise on PBS) is Buckingham, and Adrian Dunbar is Plantagenet (though, weren’t there several of those in this instance. My memory of the Henry IV plays is spotty at best, other than the several killer roles for ladies in it.)

The BBC even helpfully tweeted a first look at Cumberbatch in costume and, while he looks appropriately menacing there’s only a hint of the whole “Richard Crookback” thing going on. Which I guess makes a certain degree of sense when your star is the British heartthrob of the moment, but let’s not forget that the hunchbacked king thing is now historically accurate.

I’m something of a Richard III apologist – and my feelings on Cumberbatch are rather endlessly and repeatedly well-documented here – so this is basically a bit of Christmas come early for me. And wow the War of the Roses cast just keeps getting better and better.

Are you excited for the Hollow Crown sequel?