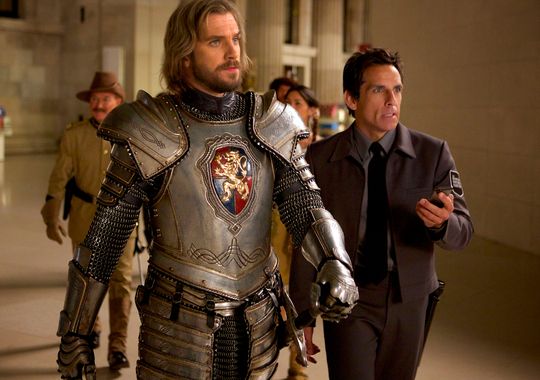 Dan Stevens as Lancelot in "Night at the Museum: Secret of the Tomb. (Photo: Kerry Brown/20th Century Fox)
Here’s the deal: We’re all never going to get over Matthew Crawley on Downton Abbey. It’s just not happening. We’re going to miss Dan Stevens around the Highclere Castle grounds forever, no matter how much we end up enjoying Lord Tony or Evelyn Napier whoever else shows up next season. So, it’s totally okay that we’re all obsessively tracking his post-Downton career with a zeal we don’t even dedicate to keeping apprised of the lives of actual family members. It’s fine.

Luckily, Stevens has been doing his best to keep busy since departing the 1920s. He’s made several movies over the past year and a half, playing everything from a swoony romantic lead (again), to a troubled drug dealer (yikes) to what appears to be a complete psychopath (oh dear). Happily, his role in franchise sequel Night at the Museum: Secret of the Tomb looks though it’s going to be a bit more as familiar.

Steven joins the third installment of the family-friendly franchise, starring Ben Stiller and Robin Williams, that follows the story of a nighttime security guard who discovers that all the exhibits in the museum come to life after the building shuts down, with the help of a magical Egyptian tablet. (It’s cute, just go with it.) Secret of the Tomb finds our heroes headed to London to solve a mystery at the British Museum and meeting a bunch of new museum figures who are secretly alive.

Stevens plays Lancelot – yes that Lancelot – and as you can see from the trailer below, looks rather perfect for the part, even if he is sporting some rather deplorable facial hair.

Watch the first trailer for Night at the Museum: Secret of the Tomb below:

Other familiar faces you probably spotted in the trailer include Owen Wilson, Ricky Gervais, Rebel Wilson and more.

Secret of the Tomb is slated to be released this Christmas. Would you go see it?