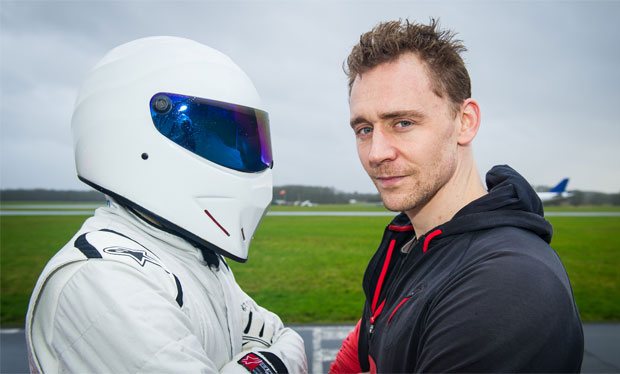 Tom Hiddleston and the Stig (Photo: Mark Yeoman, © BBC Worldwide)
What happens when you mix internet darling Tom Hiddleston with global phenomenon Top Gear? Something awesome, obviously. (We're only just past the second episode, but let's hear it for Series 21, yeah? Applause all around for the celebrity line-up thus far in my book.)

The Thor and The Hollow Crown star recently appeared as the Star in a Reasonably-Priced Car on the mega-popular driving series and did a lap of the Top Gear race track in a 1.6 Tech Line Vauxhall Astra. Sadly, this did not occur in a Loki costume, but I guess we can’t have everything.

There are glasses though, if that’s your thing.

Sadly, it’s positively pouring rain for Hiddleston’s track debut (his poor broken umbrella!), which doubtless affected his overall time. He clocked in at 1:49.9, which puts him in twelfth place on the overall Astra leaderboard (which currently has 15 names on it). So, he’s not completely in the basement, but it would appear we’ve finally found one poll that that super-popular actor doesn’t lead. (Ba dum bum. I kid, internet! I kid!)

Hiddleston did edge out the track time of previous guest Hugh Bonneville, beating the Downton Abbey star’s time by a very small margin. However, he fell short of the time posted by the internet’s other boyfriend and general British everywhere actor of the moment, Benedict Cumberbatch. The Sherlock star clocked a 1:47.8 at sixth place.

Who would you most like to see drive the Top Gear Reasonably Priced Car next?