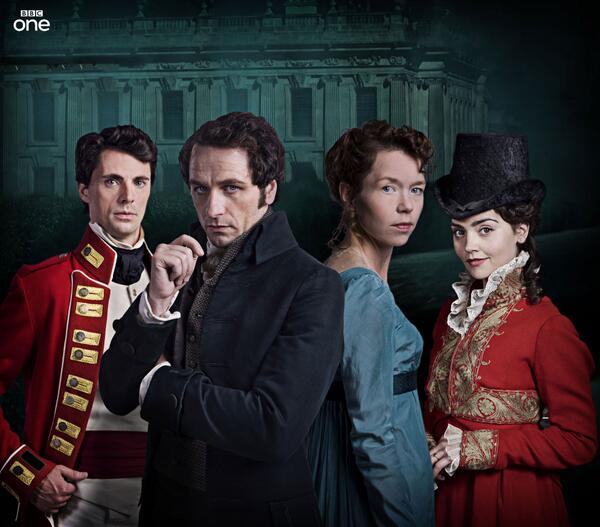 The Darcys, Lydia and Wickham (Photo: BBC)
The new trailer for the new three-part series Death Comes to Pemberley has arrived, and it’s well stocked with familiar faces, lavish costumes, beautiful scenery and, well, murder. That last bit is taking us a bit far afield from the world of author Jane Austen, it’s true, but, here we are.

The new adaptation is based on the 2011 P.D. James novel of the same name, which picks up the story of famous Austen couple Elizabeth Bennet and Fitzwilliam Darcy six years into their marriage and combines a look at their life together with a murder mystery.

Matthew Rhys stars as Darcy, alongside The Bletchley Circle’s Anna Maxwell Martin as Lizzie, and if the trailer below is any indication, they’re actually sort of great together, even if perhaps the pair may take a bit of getting used to for those of us who still love the Colin Firth and Jennifer Ehle version.

Doctor Who companion Jenna Coleman plays Elizabeth’s sister Lydia, and is joined by Dancing on the Edge’s Matthew Goode as the infamous Wickham. The all-star cast also features Downton Abbey’s Penelope Wilton, Waking the Dead’s Trevor Eve, and The Thick of It’s Rebecca Front, among others.

You can watch the trailer below.

The official synopsis reads: "Elizabeth and Darcy, now six years married and with two young sons, are preparing for the lavish annual ball at their magnificent Pemberley home. The unannounced arrival of Elizabeth’s wayward sister Lydia, however, brings an abrupt and shocking halt to proceedings when she stumbles out of her chaise screaming that her husband Wickham has been murdered.

Darcy leads a search party out to the woodlands, and when they discover the blood-smeared corpse not of Wickham, but his traveling companion. Suspicion is at once aroused. The dramatic and unnerving events of the evening have shattered the peace both of the Darcys and of Pemberley, and as the family becomes caught up in the ensuing murder investigation, a mysterious web of secrets and deceit will threaten all that the Darcys hold dear...

The drama will premiere in the UK on Boxing Day and will screen in the US on Masterpiece Classic sometime in 2014.

What do you think of the trailer? Thumbs up or down?