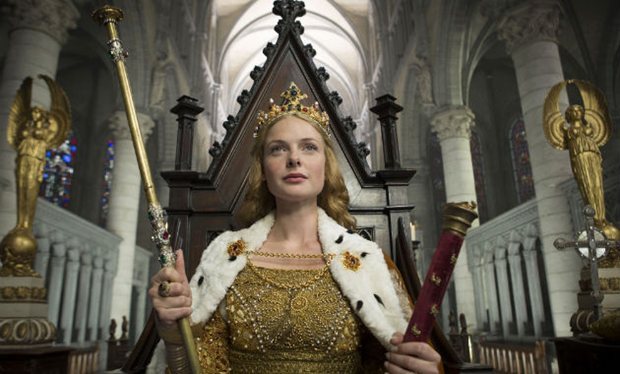 You guys remember The White Queen, right? It was this BBC miniseries that adapted several of Philippa Gregory’s popular historical novels about the Wars of the Roses. It aired here in the States on the premium cable network Starz and a lot of people liked it and were pretty sad to learn that it was a one-and-done sort of series, particularly when there’s so much story leftover after King Henry VII is crowned.

Anyway, despite the fact that the BBC announced that they were finished with the property, back in 2013 Starz seemed really into the prospect of doing some sort of sequel, most likely based on Gregory’s novel The White Princess. The novel follows the story of Elizabeth of York, daughter of White Queen Elizabeth Woodville, focusing on her marriage to Henry Tudor and their life together, which included the birth of multiple children, several rebellions and various other dramatic incidents.

That post has remained pretty popular on this site for the past year and a half, so it would seem the interest in this property is still there, despite the fact that no more news – or even confirmation that the project was in the works – seemed forthcoming. Many fans (probably) had given up on ever hearing anything else about The White Princess. (I may have been one of those people.)

Well, get ready, people, because it looks like The White Princess might just be happening after all.

According to the Radio Times, the sequel is “definitely in the works”. And they apparently learned this information straight from the source – from Gregory herself.

The author has been making the press rounds of late to promote her latest Tudor novel, The Taming of the Queen, which focuses on Henry VIII’s last wife, Katharine Parr. And she seems pretty confident that White Princess is a go.

"I’m pleased to say we are in the process," Gregory told the Radio Times. "American producers Starz have commissioned a second series which is going to be called The White Princess. It’s going to be based on the next three novels in my series of books."

Now, admittedly, I’m not entirely sure what that last sentence means. The White Queen  was based on the three novels – White Queen, The Red Queen and The Kingmaker’s Daughter – in Gregory’s “Cousins’ War” series, which all sort of concerned themselves with the same time storyline and the three main women in it. My best guess would be that the show would adapt White Princess alongside Gregory's novels The King’s Curse (which tells the story of Elizabeth of York’s cousin Margaret de la Pole) and The Constant Princess (which focuses on Katharine of Aragon, her arrival in England and her betrothal to Arthur Tudor). And these are the next three novels in her series, chronologically speaking from a story perspective - though they were actually at very differnet times.  (If I recall correctly, I think Constant Princess predates the entire Cousins' War series by several years.)

Focusing on this sequence of novels would allow the show to focus on another set of lesser known – and therefore dramatically interesting – figures in Tudor history and stop before the arrival of Anne Boleyn as a major player in the narrative, which let’s face it, is a story that’s been told with no little frequency over the past few years.

Of course, there’s still been no official announcement or confirmation from anybody at Starz – or even a recent mention of the show from what I can find. (And the recent Television Critics Press Tour would have been a great place to at least mention that it’s in development, don’t you think?) But, regardless, you’d assume that if anybody was going to know what was up with the situation, it’d be the author herself, so I’m going to go with it until I can prove otherwise.

I really want there to be a White Princess series, can you tell?

What about you guys? Do you think it’ll actually happen this time? Are you still excited about the possibility?