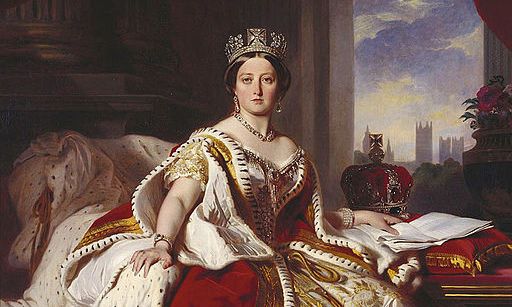 Queen Victoria in her coronation robes. (Photo: Painting by Franz Xaver Winterhalter from the Royal Collection)
In their ongoing search for an heir apparent to global hit costume drama Downton Abbey, which is ending after its sixth season, ITV has decided to greenlight a new dramatic adaptation of the life of one of England’s greatest monarchs, Queen Victoria.

This ambitious eight-part drama – titled simply Victoria – will focus on the beginning of her lengthy 63-year reign. Queen Victoria ascended to the throne when she was just eighteen years old, so, happily there’s plenty of story there.

Acclaimed novelist Daisy Goodwin will pen the scripts, in her screenwriting debut.

This new series will be produced by Mammoth Screen, the same folks behind the splashy new Poldark adaptation that just finished its run in the UK (and will premiere here in the States on PBS starting June 21, just an FYI).

“This epic series is a chance to see the Victorian age through the eyes of the Queen herself for the first time,” said ITV Director of Drama Steve November. “She's a vibrant, fascinating character whose legacy lives on today. Her life story is one that is by turns genuinely dramatic, romantic and surprising.”

Luckily, the story of Victoria’s life is also a lengthy one, as she reigned from 1837 to 1901. This means there’s plenty of material to cover should this series turn out to be a successful one. Victoria is (for the moment at least) the longest reigning monarch in British history and her life included a great love affair, a massive depression, several assassination attempts, and more. She also had nine children, most of whom married into other Royal families of Europe. There will definitely be no shortage of story here.

"Queen Victoria's court is the perfect setting for an epic drama - a seething hotbed of scandal, corruption and romantic intrigue, involving everyone from the humblest dresser to the Mistress of the Robes, the lowliest bootboy to the Lord Chamberlain,” explained Executive Producer Damien Timmer. “When we join Victoria in 1837, England is unrecognisable from the country it will become by the end of her reign. As she takes her fledgling steps as monarch we slowly see modern Britain emerge.”

Victoria will begin filming in September, with an eye to a 2016 release.

Personally, I think Queen Victoria's life, family and reign are perfect fodder for a period drama and I'm sort of surprised that I can't think of one having been done before. (Feature films Her Majesty Mrs. Brown and The Young Victoria were both great, though.) What do you all think? Sound like something you'd watch?

In 1837, a diminutive, neglected teenager rises to become a powerful monarch.