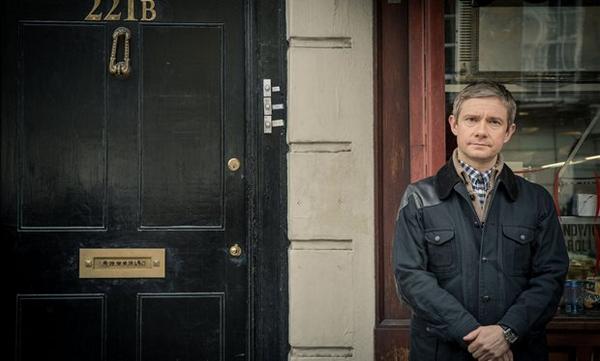 Martin Freeman as John Watson in "Sherlock" (Photo: BBC)
al boards, as his production of Richard III has just concluded, Martin Freeman already has a new gig. The Sherlock star has been tapped for the lead role in an upcoming feature-length BBC drama about the trial of one of World War II’s most notorious figures.

Freeman will play TV producer Milton Fruchtman in 90 minute film The Eichmann Show, which will tell the story of the televising of the trial of Adolf Eichmann, one of the chief architects of the Nazi “final solution,” or the plan to systematically exterminate Europe’s Jews.

Eichmann was captured by Israeli secret agents in Buenos Aires after the war and transported to Israel, where he was put on trial in 1961. Fruchtman played a key role in making sure that Eichmann’s four-month trial in 1961 was an event seen around the world – it was shown on TV in 37 countries and provided tremendous insight into the horror of the death camps as victims were seen relaying their experiences live. It has been estimated that four-fifths of the German population watched at least an hour a week, and the trial has been described as the first true global TV event.

Freeman will be joined by Without a Trace star Anthony LaPaglia as TV director Leo Hurwitz, with further casting still to be announced.

The Eichman Show is part of a season of programs which are being lined up to mark the 70th anniversary of the liberation of Auschwitz-Birkenau in January.

“The liberation of the camps is a very significant anniversary which the BBC will mark with a range of thought-provoking programmes,” said BBC Director of Television Danny Cohen.

This programming is to include special documentaries featuring interviews with Holocaust survivors, a  commemorative memorial broadcast event on Holocaust Memorial Day, and the screening of landmark 1985 series Shoah, a ten-hour film which featured interviews with both survivors and perpetrators of the Holocaust.

Here's hoping that we get the chance to see this for ourselves on this side of the pond - the story sounds fascinating.