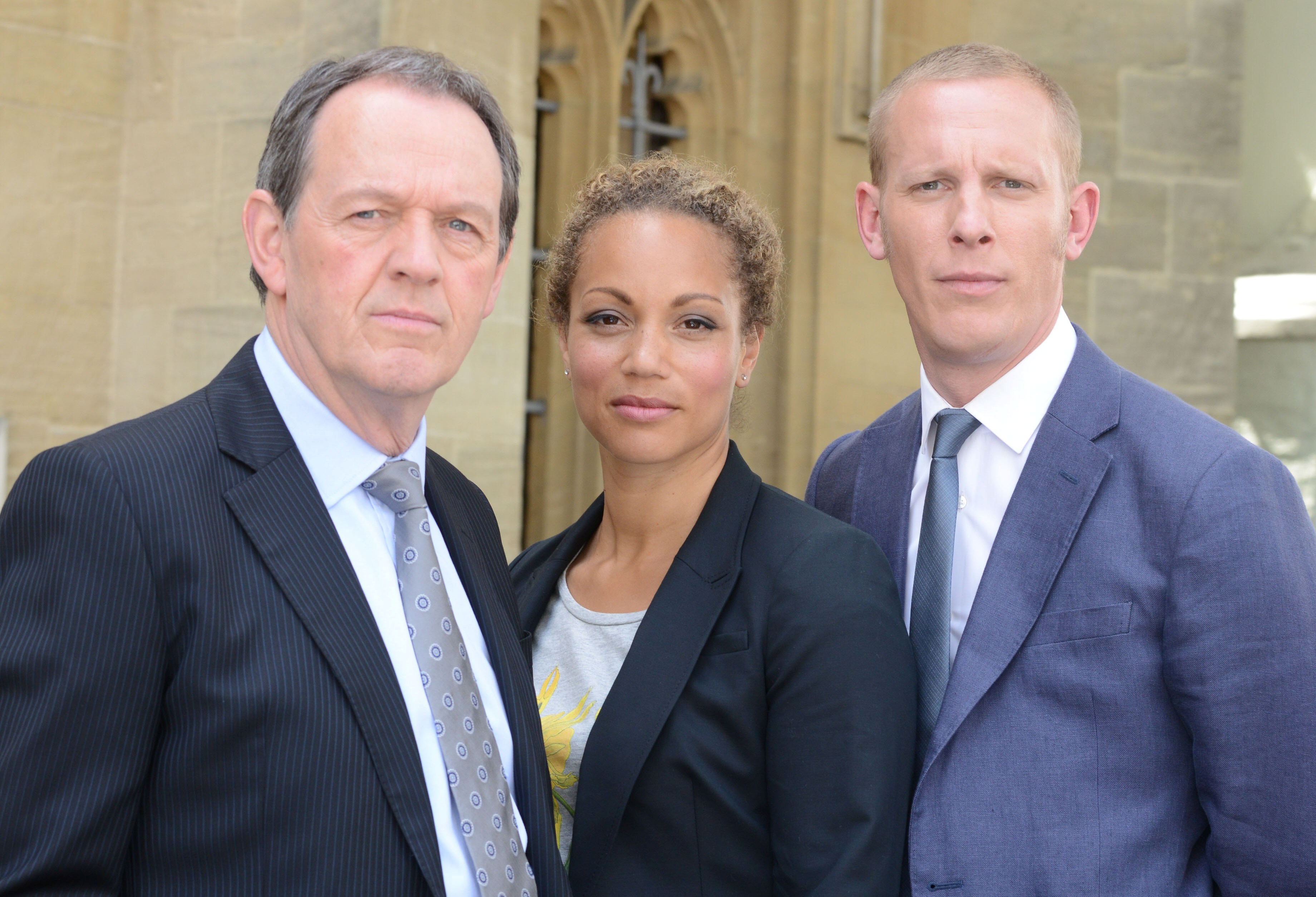 Kevin Whately, Angela Griffin and Laurence Fox in Series 7. (Photo: Courtesy of (C) ITV Studios for MASTERPIECE)
Who remembers this scene back in the summer of 2013?

DS James Hathaway (Laurence Fox) and DI Robbie Lewis (Kevin Whately) with pints in hand and a picturesque view of the water ahead reveal their plans for the future; Lewis is retiring and Hathaway is leaving the police force. That was supposed to be it, ces’t fini. Inspector Lewis was drawing to a close so its actors could move on to other projects – Fox and his bride Billie Piper were going to try their luck in Hollywood and Whately was on the record saying he was getting too old to play a police inspector anymore.

Fast forward a little more than a year - Lewis and Hathaway are reunited and trying their best to keep Oxford’s streets safe, mostly from their own eccentric and educated residents. Don’t get me wrong, I’m not complaining since Lewis is one of my very favorite detective dramas. It was just the speed of the about face that’s left me a bit confused.

That being said, let’s get on to the details of the new series of Inspector Lewis which will be premiering on Sunday, October 5th at 9 pm ET. It features three new murder mysteries entitled “Entry Wounds”, “The Lions of Nemea” and “Beyond Good and Evil”.

Watch a preview for the new season below:

A recently retired Robbie Lewis gets a call from his old boss, Chief Superintendent Jean Innocent (Rebecca Front). It appears the Thames Valley Police force is overwhelmed with cases and they could use an experienced copper on a part-time basis to help lighten the load. Innocent leads Robbie to believe that newly returned and promoted DI Hathaway has asked for Lewis’ assistance though James denies he made such a request.

Robbie, on the other hand, seems eager to leave his DIY projects behind and get back in the police game, much to the disappointment of his girlfriend and forensic pathologist Laura Hobson (Clare Holman). Not to worry, Lewis and his lady friend are still very much in their “honeymoon” phase. Dr. Hobson just wants to make sure Robbie’s not getting himself into dangerous situations he may no longer be equipped to handle.

DI Lewis’ return does not mean that things have gone back to the status quo. Hathaway firmly yet respectfully reminds Lewis when he starts to fall into the role of  lead investigator. Another change of note is that this duo has turned into a trio. Allow me to introduce the newest member of the team – DS Lizzie Maddox portrayed by Coronation Street’s Angela Griffin.

Lizzie is Hathaway’s most recent DS and, though a competent and conscientious police officer, her superior officer continues to shut her out and refuses to delegate smaller portions of the investigations to her. The scuttlebutt is that even before their first big murder case has been closed, Lizzie has put in for a transfer to another department.

As time goes on, this new team gels. Lewis encourages Hathaway to give Maddox more responsibilities and to not put so much pressure on himself. James lets go of some of his control issues and accepts Robbie, once his traditional mentor, as more of a helpful advisor. After a rocky start, Maddox decides to ride it out in order to see what a career in Oxford has to offer.

As for the mysteries themselves, I won’t go into much detail for the sake of spoilers. Expect roughly the same level of murder (about three per episode), misdirection and complicated plot lines as previous series. Revenge, jealousy, despair and plenty of secrets stoke the fires of murder. In one episode of note, an old case of Robbie’s comes back to haunt him when a police killer he put away thirteen years ago wins his day in court and violent attacks against officers begin anew.

If you are already a fan of the Inspector Lewis franchise, this slightly unexpected return will not disappoint. If you’re not familiar with Oxford’s favorite coppers, you’re in for a treat starting the 5th of October on your local PBS station.