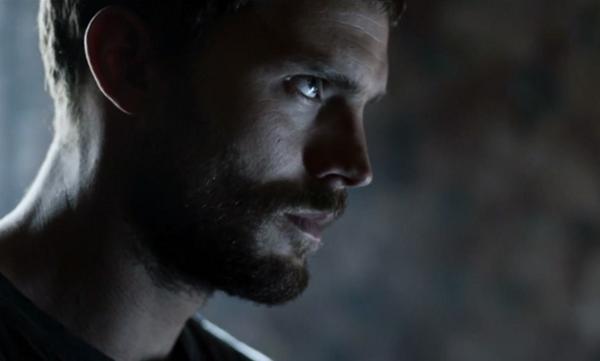 Jamie Dornan in "The Fall" Series 2 trailer. (Photo: BBC)
BBC Two has released the first trailer for the The Fall’s highly anticipated second season and it’s actually possible that this one is even creepier than the first. Dark and foreboding, it really makes you wonder what we’ve got to look forward to in Series 2.

The crime drama – which stars Gillian Anderson and Jamie Dornan  - tells the story of DSI Stella Gibson, a hard, but talented detective who is on the trail of a serial murderer who’s been targeting young professional women. However, thanks to the twist that makes this show more interesting than your average procedural, we already know that the killer is Paul Spector (Dornan), an unassuming everyman with a charming wife and family at home.

Things will pick back up right where we left at the end of last year, with Dornan’s serial killer Paul fleeing Belfast with his family in town, narrowly avoiding capture by DS Gibson. Additionally, Merlin star Colin Morgan has joined the cast for Series 2, playing an officer who will work closely with Gibson on the investigation

Watch the new trailer for yourselves below:

So…Jamie Dornan is terrifying, huh? (And it’s understandable if you’re suddenly having problems visualizing him as a romantic lead in 50 Shades of Grey after that!)

Seriously – even though you know objectively that Gillian Anderson’s in this season, did anyone else have a moment where you sort of doubted it there for a second? So well done, this clip!

Word is that The Fall will screen on BBC Two this autumn, and hopefully Americans will see a similar broadcast situation to Series 1, when the drama simultaneously became available on Netflix. Fingers crossed!

Have you seen The Fall? Are you looking forward to it continuing?