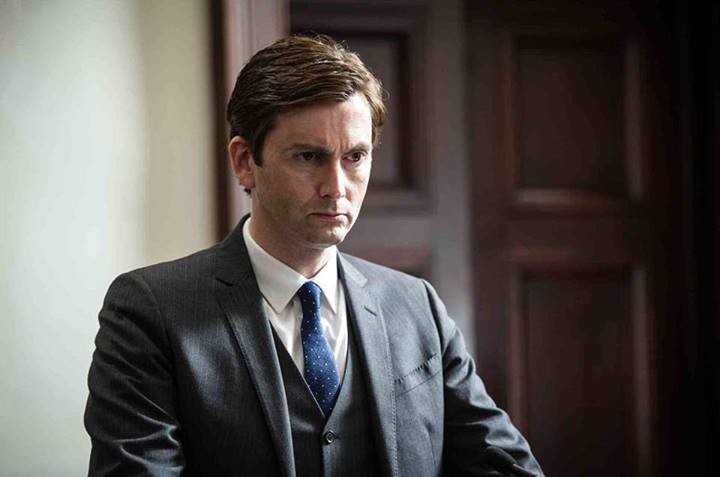 David Tennant, being all barrister-y. (Photo: BBC)
Good news for fans of former Doctor Who star David Tennant! The Tenth Doctor’s recent BBC mini-series The Escape Artist is finally coming to America and will premiere on PBS stations nationwide beginning Sunday, June 15 as part of the new season of Masterpiece Mystery.

Created and written by David Wolstencroft, the three-part drama originally aired in the UK last Fall. It stars Tennant alongside a great cast that includes Sophie Okonedo, Tony Kebbell  and Ashley Jensen.

It follows the story of talented barrister - that’s British for lawyer -Will Burton, who is known for never losing a case and for his ability to get obvious criminals out of tight legal corners. (That’s why he’s called “The Escape Artist”, after all!)

But when Burton agrees to defend a notorious murder suspect and manages to get him off on a technicality, the decision comes back to haunt him. Dun dun dunnnn!

Watch the BBC trailer for The Escape Artist below – and mark your calendars for mid-June.

The Escape Artist: Trailer - BBC One

“The law often seems like an intellectual exercise,” said Wolstencroft. “But scratch under the surface, and it’s all blood and guts. I wanted to write a thriller set in the legal world that’s as much about those primal feelings as it is about the twists and turns of the case. David Tennant is one of the most accomplished and iconic actors of his generation. Seeing him in Will's shoes is incredibly exciting."

Thoughts? Are you happy to have David Tennant heading back to your TV screens?

(ETA: General reminder to keep a close eye on your local PBS station’s listings for this production. June usually features pledge programming for many stations, so this premiere date could shift a bit.)