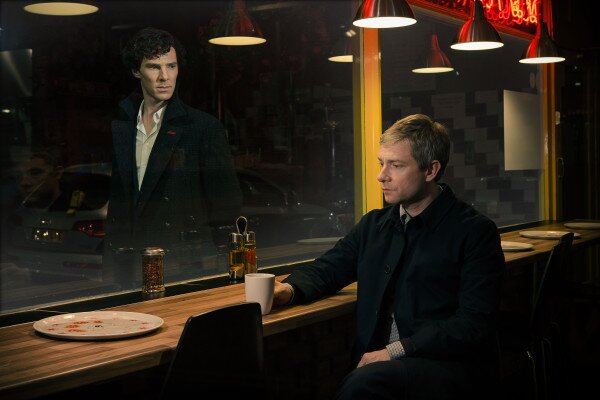 Sherlock Holmes and the Case of the Christmas Present, Apparently (Photo: Courtesy of (C)Robert Viglasky/Hartswood Films for MASTERPIECE)
Looks like Santa is bringing Sherlock fans something special this year!

While the hotly anticipated third series of the mega-popular crime drama doesn’t air until the new year (January 1 in the UK, January 19 in America), the BBC has announced that a special Christmas mini-episode will be screened on its Red Button interactive platform this December. The new segment will be called Many Happy Returns and will go live on Christmas Day.

The BBC is referring to this clip as a “mini-episode”, but there are no details on how long the clip will be or whether either of series’ stars Benedict Cumberbatch and Martin Freeman will make an appearance.

The brief but intriguing synopsis reads: Sherlock Holmes has been gone for two years. But someone isn't quite convinced that he's dead...

In addition to our Christmas schedule announcements, we can also confirm that we have a #Sherlock mini episode called 'Many Happy Returns'.

If past is prologue in this particular instance, however; we might be wise to keep our wild expectations in check on both counts.

During the past few seasons of Doctor Who – a series that’s also produced by Sherlock creator Steven Moffat – fans have been treated to a variety of online prequels, sequels, introductions and standalone mini-stories that supplemented the main episodes. These digital extras have ranged from specific episode prequels like The Great Detective  to Pond Life, a dedicated five-part digital arc that featured two of the show’s main characters. Recent 50th anniversary prequel The Night of the Doctor clocked in at over six minutes and featured a surprise appearance by Paul McGann.

However, Pond Life and Night of the Doctor are largely the exceptions that prove the rule – at least in Doctor Who-land, these prequels tend to be short teases that don’t do much provide much in the way of plot or character development, and often focus on secondary characters. Therefore, it seems unlikely that Many Happy Returns will feature John getting a Christmas card from Sherlock (though we can always keep the dream alive) and is much more likely to spotlight one of the denizens from that Holmes fan group we saw referenced in the last teaser trailer. But, that probably doesn’t matter. We’re all so starved for any sort of new Sherlock footage it seems safe to say that we’ll all be over the moon about it, whatever it turns out to be.