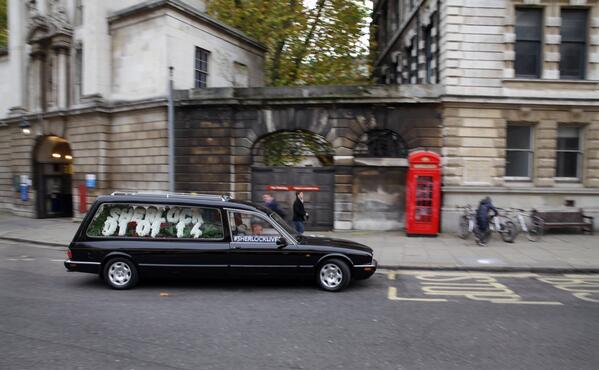 The "Sherlock Lives" promotional efforts are awesome this year. (Photo: BBC)
Talk about coming back in style.

In a move packed with so much dramatic flourish that we can only assume the consulting detective himself would approve, the BBC announced that the highly anticipated third series of Sherlock would begin on January 1, 2014 in the UK. And they did so by having an actual hearse drive around London’s several notable Sherlock-related landmarks with the premiere date emblazoned in tribute wreaths.

It’s pretty fitting, actually, given that Series 2 finale The Reichenbach Fall ended with Sherlock Holmes presumed dead (though it seems like everyone but poor John Watson knows that’s not exactly true) and that Series 3 will begin with an episode entitled The Empty Hearse. Whether this particular promotional hearse is the same as the one we all presume will show up in that episode at some point, is anyone’s guess.

The premiere date hearse, sporting a hashtag in the window that read #SherlockLives, made the circuit of important Sherlock filming locations in London, including St. Bart’s hospital and the North Gower Street address that houses both the actual Speedy’s Café and the building that stands in for the exterior of Sherlock and John’s Baker Street flat.

Get a look for yourselves below.

This is pretty awesome, right?

Co-creator Mark Gatiss also had this to add:

Excitingly enough, Americans won’t have to wait very long to see The Empty Hearse for ourselves. Series 3 of Sherlock premieres January 19, 2014 on Masterpiece Mystery.

Are you excited for more Sherlock yet?