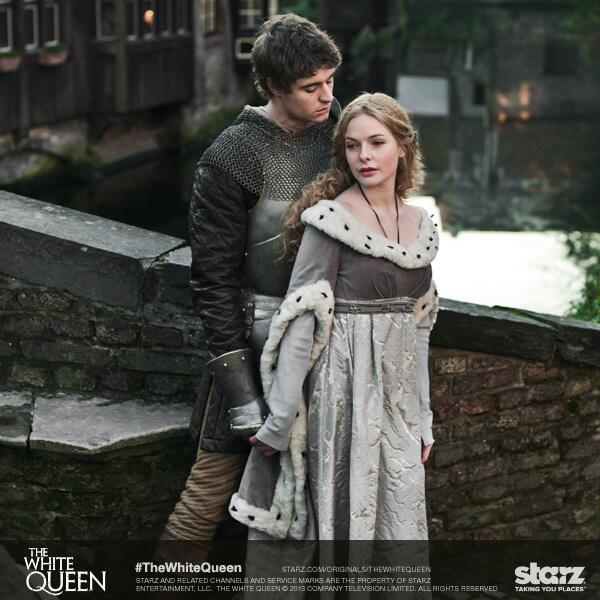 Fabulous outfits already on display in "The White Queen". (Photo via Starz's official White Queen Twitter account)
A new trailer has been released for upcoming ten-part series The White Queen and if this sort of drama is in any way your thing, it’s going to get you pretty excited for its debut. Based on Philippa Gregory’s bestselling Cousins War series of historical novels, the series will tell the story of the Wars of the Roses from the perspective of the women involved, primarily Elizabeth Woodville, the titular White Queen and wife of King Edward IV, Margaret Beaufort, mother of the man who would become King Henry VII, and Ann Neville, the daughter of Warwick the Kingmaker and eventual wife of King Richard III.

Even though this trailer shows us zero actual footage from the series itself, it’ll probably leave you feeling way more excited to see it than the Starz promo that seemed to focus almost exclusively on the fact that King Edward IV was a womanizer, rather than the actual feud between the Lancasters and the Plantagenets. And also, really, the series is called The White Queen – and ostensibly about the ladies of the Wars of the Roses – and you make the teaser trailer all about King Edward. Feeling a bit judge-y about that still, even if it was enjoyable to watch. (Not that this matters much beyond my being cranky about it though. I can't wait to watch this seires. I loved the books!)

Seriously, this one is so much better, even though all it shows us is ladies in armor. Go watch.  The best thing this clip does is highlight that while this mini-series is arguably about a (series of) war(s), much of the conflict didn’t actually take place on a battlefield and that these particular politically savvy women were just as influential as their male counterparts in determining the outcome of events. Take that, King Edward.

The White Queen is one of the most ambitious series the BBC has ever produced – the ten one-hour episodes took 125 days to shoot and the budget clocked in at somewhere around $40 million. It looks beautiful, though, so it seems safe to assume they got their money’s worth.

The series is set to premiere “this summer” in the UK and is scheduled to bow in the US on Starz beginning August 10. What do you think? Look interesting?