As viewers may remember last time Vienna Blood was on the air, Season 2 left things on a cliffhanger. However, it's been a year since then, both in our time and theirs. Since viewers were last in Edwardian Vienna, Max has written a best seller on the subject of psychoanalysis and moved to a fancy new address and hired a housekeeper, Elena (Victoria Nikolaevskaja). However, when Oskar is called into the murder of Adele Zeiler (Sara Schmidt), a seamstress at the exclusive Modesalon of Madame Vogl (Lisa Marie Potthoff), he tracks down Max to his new digs and asks for help.

Adele had been left to lock up by the foreman, Valentin (Nils Artzmann), though unbeknownst to him, she stayed to wear Vogl's latest designs for a boyfriend. Jaeger and his new assistant, Frau Koppensteiner (Anne Kulbatzki), determine it was a hatpin to the back of the neck, and max realizes it must have been during sex. Max and Oskar head to the fashion house to ask questions and run into Clara. We learn she's become a writer, doing articles on the fashion industry, as Max tells Oskar Clara called off her engagement to Jonas after Season 2's ending window incident. However, the two did not get re-engaged; they decided never to see each other again if they could help it.

The Vogls, Kristina and her husband, Dr. Keinz (David Rott), live on the premises, as do Valentin and maid Selma Wirth (Lara Mandoki). The only other male employee is the studio photographer, Ludo Rainmayr (Xaver Hutter); Oskar asks to talk to all three, though questioning leads nowhere. Meanwhile, Max heads home to Mendel's clothing shop, where Leah is now the manager. Leah and Mendel know Vogl; Leah calls her corsetless caftan gowns "very modern," while Mendel insinuates Kristina's designs disguising a woman's femininity stem from being "not normal."

Max receives a note from the killer at his office, boasting of his crime. However, Oskar notes the postmark was from before Adele's death. In search of other victims, they ask Frau Linder to check the case files. She turns up Mathilda Brunner, a flower market worker. The detective on the case, Tauber (Rainer Egger), wrote off her death as just another slum disease, but upon getting the body, there's the same puncture wound.

Oskar takes the case to Von Bulow, who waves Oskar on to keep going, much to Max's bewilderment. (It turns out he's into Max's celebrity.) At Brunner's slum apartment, her neighbor, Therese Thanhofer (Maria Kostlinger), suggests Mathilda supplemented her flower sales with prostitution. At a dead end, Max suggests making the case public to smoke the killer out and maybe get a witness.

It works. Frau Vogl says she saw the killer that night -- she thought it was a hallucination (she was on laudanum); he had no face, just a black mask. The faceless man stops by Max's office, dropping off a butterfly, referencing Max's comments about collecting dead women like pinning butterflies to a board. But not everyone is happy; Clara's editor spikes her article; no one wants a puff piece when there's murder. Ever enterprising, Clara visits Max, pointing out how helpful she could be as a fashion industry expert and a female perspective on these women. Like last time, Max turns her down.

Oskar's visit to the slums did good; he scared the landlord into fixing it. Therese shows up to thank Oskar with cake he eats while Max has the family over for dinner. The killer then calls, promising more victims. Katrina and her husband sleep together at the Vogl house as the murderer strikes again. Selma is dead, though the murder is not quite the same. There's the hatpin to the neck, but her face is bruised; as Max notes, it doesn't fit the pattern, though Valentin swears he saw a masked man.

Koppensteiner finds a connection between victims: Silver rings from the same second-hand stand. The owner admits the rings are supplied by a morgue worker, sending Max and Oskar to Herr Schopp. Max realizes the killer's talk of "artistry in death" is because he paints corpses. But they are too late; the man, Markus Sprenger (Markus Friestatter), has left on a date with the newest ring purchaser -- a waitress from the local tavern. Max and Oskar reach the woman in time, saving her life, but Sprenger lights the place on fire and takes off.

Max and Oskar set a trap for Sprenger, but he doesn't come to boast. He's upset: he didn't kill Selma, it was a copycat, and he wants Max to correct the record. When Max refuses, he pulls out a knife, and Oskar shoots him. With two cases wrapped, Max and Oskar head back to Selma's room and find a burnt photograph. Oskar realizes Ludo is a former porno dealer. (Not former, he's still in business pressuring wannabe models into posing nude.) Oskar forces him to talk, and they learn the photo was something Ludo showed Selma from long ago while they were drinking. 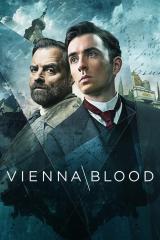 With a need to get the killer to confess to Selma's murder, Max humbly begs Clara for help. He says she can write up his case if she tells him about masks. At the Modesalon, Oskar and Max tell the Vogls Sprenger is dead; the case is closed. Max then asks -- since his family's also in the clothing business -- if he can see the Vogl collection up close. Vogl hesitantly agrees, clearly not seeing the harm in it.

But, of course, it's a trap. Frau Vogl's convenient "remembering" of seeing the killer after the article wasn't genuine but a set-up so she could kill Selma, who was blackmailing her. The mask was an added detail because she owns one she wore the night of the murder. (That's who Valentin saw.) She went up there and beat Selma after having sex with her husband, stabbed her with the hat pin, and then used the semen still in her body to make it look like Selma'd had intercourse. Genius, really, but they arrest her anyway.

Clara gets her big front page splash, and let's admit it, she deserved it, and maybe she and Max can find their way back together as equals. (Especially with Amelia seemingly MIA?) As for Oskar, he heads back to the now-cleaned-up apartments to return Therese's cake box. She invites him in for supper and introduces him to her daughter Hannah (Ilvie Mortiz). Before long, he's reading aloud to the little girl. It's a picture of domestic tranquility he's wanted ever since his child died.