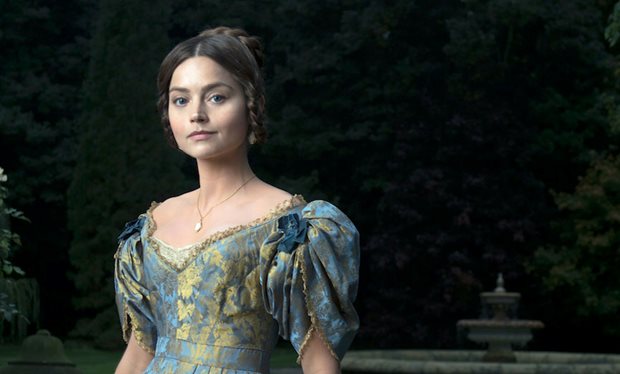 Jenna Coleman a Queen Victoria in "Victoria". (Photo: Mammoth Screen)
Earlier this Fall, Jenna Coleman announced that she was – for real this time – leaving Doctor Who. The reason that she’d decided to hang up her TARDIS key turned out to be a pretty good one –she’d been cast as the lead in ITV’s lavish eight-part drama based on the life of Queen Victoria.

The series – titled simply Victoria – will focus on the early life of the Queen, from her ascension to the throne at the age of 18, through her courtship and marriage to Prince Albert. Victoria went on to rule for 63 years – Queen Elizabeth II just broke her record as longest-serving British monarch this past September – so there’s plenty of fodder for future seasons should the show prove itself successful. (Personally, I’d be so into this, so I hope that’s exactly what happens.)

Now Rufus Sewell (Zen, The Man in the High Castle) has officially joined the cast as Lord Melbourne, Victoria’s first Prime Minister. The two immediately connected and their close friendship became a popular source of gossip that threatened to destabilize the Government, angering both Tory and Whigs alike.

Notably it doesn’t seem as though anyone has been tapped to play Prince Albert yet. Since he and Victoria shared a rather famous love story – Victoria wore black for the rest of her life (~40 years) after his death in 1861 – it’s kind of an important part. (Fantasy casting suggestions? Go!)

And as an extra bonus, here’s a first full look at Coleman as Queen Victoria, courtesy of producers Mammoth Screen:

(Is anyone else obsessed with this dress? Just me??)

Production on Victoria is slated to begin in October, with an eye to a TBD airdate in 2016. No word yet on an American broadcast partner, but here’s hoping that comes sooner rather than later. (Mostly because I really want to see this!)

Thoughts - on the series itself or Coleman in particular? Hit the comments.

In 1837, a diminutive, neglected teenager rises to become a powerful monarch.