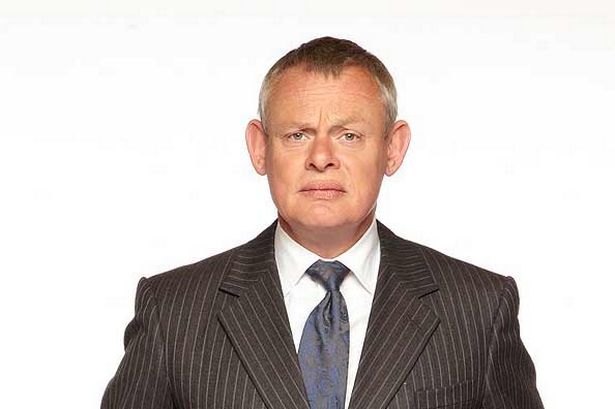 Martin Clunes as "Doc Martin". (Photo: ITV)
As you probably already know, Martin Clunes will be coming back to PBS next month! Hold on, the broadcast of Doc Martin Series 7 is unfortunately still some time off in the future. But beginning Sunday, September 6, Clunes will be starring as Sir Arthur Conan Doyle in the three-part mini-series Arthur & George.

And while true Clunatics are well acquainted with the varied roles Martin has embodied over the years, I thought it would be good preparation (and entertaining as well) to look at Mr. Clunes through a decidedly less Dr. Ellingham-ish prism.

The following are states of being and actions that would be quite contradictory to the persona of the Port Wenn GP we’ve come to know and love despite his prickly manner.

1. We’re all aware Martin doesn’t partake in alcoholic beverages very often. Apparently drinking makes him sleepy to the point of passing out. Therefore witnessing a sloppy drunk Marty would not be very likely. Clune’s character Gary Strang from Men Behaving Badly, on the other hand, is no stranger to the drunken evening out.

2. Dr. Ellingham’s bedside manner leaves something to be desired.  His blunt, lecturing manner does nothing to put his patients at ease. However, if you hire Shawcross and Sons to arrange your loved one’s funeral, you are guaranteed patience and compassion in your time of grief.

In this clip from William and Mary we experience the heartbreaking funeral of three teenagers who died in a car crash. The ceremony is respectfully and lovingly organized by undertaker and owner, William Shawcross wonderfully portrayed by Mr. Clunes.

"Why does it always rain on me?" by Travis (William and Mary)

3. The good doctor is infamous for his aversion to dogs while most pups have an attraction to him which is equally strong. Many of you probably know that Martin Clunes is a devoted animal charity supporter and owner of a trio of dogs. In fact, in 2008 he presented a documentary entitled Martin Clunes: A Man and his Dogs, which explores the relationship that has developed between humans and canines over the centuries. You’d never see Doc Martin snuggling and cavorting with any animal like this…

Martin Clunes: A Man and His Dogs preview

4. I don’t know about you, but I can’t recall seeing the doc ever let go and belt out a song. Let alone strum, pluck or pound out a tune. Martin C., on the other hand, appears to be quite a musical guy. I’ve seen him sing as well as play piano, guitar and banjo in various roles.

In Demob, Clunes is Dick Dobson, a WWII soldier recently demobilized and looking to adjust to life in peacetime. He and his friend Ian (Griff Rhys Jones) are quite the double act.

A clip from "Demob"

5. I’ve saved the best for last! In 1983, Martin appeared in a four-part Doctor Who serial called Snakedance. By all accounts (IMDB), it was his first TV role and if you watch the following clip, I think you’ll find virtually no resemblance between the young, tunic-draped alien, Lon, and the buttoned up style (and demeanor) of Dr. Ellingham.

Legend of the Mara - Doctor Who - Snakedance - BBC

I hope I’ve succeeded in demonstrating the range of an actor who many viewers know as one particularly complex and colorful character. I know I’m looking forward to seeing Clunes' interpretation of Sherlock Holmes creator, Sir Arthur Conan Doyle. Fingers crossed, we’ll all be able to get that Doctor Who image out of our minds, especially the earring.

Martin Clunes British Actors You Should Know Arthur and George