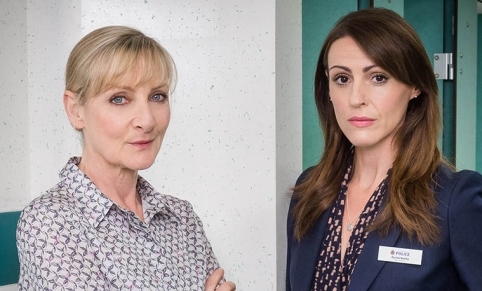 Stars Suranne Jones and Lesley Sharp are back as Rachel Scott and Janet Bailey, the odd couple-ish crimefighting partnership forged over four previous series. This new season will feature a single crime story told over the course of all three installments, and will be “one of the biggest and darkest cases” that the detective duo has ever had to face.

The new three episode order marks a fairly significant format switch for the show, whose previous seasons clocked in at between six (Season 1) and eight episodes (Seasons 2-4) each. Of course, those episodes were all standalone installments in the sense that they lacked an overarching case between them – though I’d argue that many thematic and character beats carried over each week – instead of a serialized narrative.

So, what’s going to happen in this season that’s such a big deal?

Per the official announcement, the story goes like this: With DCI Gill Murray in retirement, ever-ambitious Rachel returns from her Vice secondment fired up and full of new ideas and initiatives. She’s gained valuable experience and really wants to make her mark as she returns to Syndicate 9’s Murder Squad.

Exhilarated to step up to the plate, Rachel is exactly who Janet and the Squad need to move forward with a terrifying and sinister Internet crime investigation of epic scale and unrelenting horror. Using her Vice authorisation, Rachel accesses a disturbing world where people brag about committing murder and lay down the gauntlet for the next victim.  A game of ruthless life or death daring develops, as Scott & Bailey investigate multiple killers with horrifying and everlasting consequences.  They will be changed forever and the investigation will take a devastating toll on their private, professional and personal lives.

“We’re delighted to be returning to Scott & Bailey with an investigation that will have everlasting consequences for the characters,” said Executive Producer Nicola Shindler. “This series is more ambitious and sinister than ever before and the concept of a three part story allows us the opportunity to tackle a story of epic scale.”

This switch definitely seems to push Scott & Bailey more toward the “event series” category – see also: Luther and Sherlock – rather than a grind-it-out week to week procedural. Plus side? There’s a lot to be said for more in-depth and complicated plots. (I’m always here for serialized drama!) Negatives? Three episodes is way less than eight.  However, rumors were flying after Season 4 aired that the show had been canceled entirely, so if this shorter, serialized seasons business is a mutually agreeable way to keep it going, everyone wins, right?

What do you think of the prospect of more Scott & Bailey?