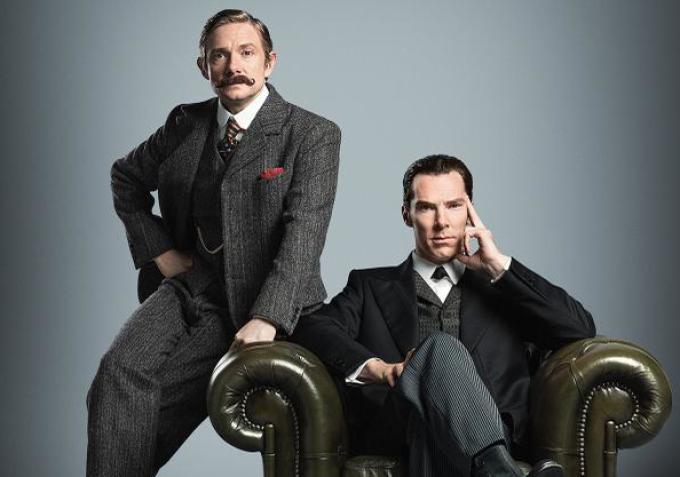 Benedict Cumberbatch and Martin Freeman get their Victorian era looks on. (Photo: BBC)
’m officially home from a wonderful long weekend at San Diego Comic Con, also known as nerd nirvana. I saw a lot of cool stuff and geeked out about a lot of things, so bear with me as I recap a few of them.

Probably the best thing I saw at Comic Con this past weekend was a panel featuring several members of the Sherlock cast and crew, including creator Steven Moffat, executive producer Sue Vertue and star Rupert Graves.

The group chatted and took questions from fans for roughly an hour, touching on wide ranging topics from the show’s upcoming Victorian special episode to how to write comedy to what makes Sherlock so popular. It was a very enlightening and entertaining panel, just from a topical sense – and that’s before they dropped the first new Sherlock footage we’ve seen in the better part of two years.

Yup, they released a clip from the upcoming one-off special episode, and it is awesome.

Watch the first footage from the upcoming Victorian episode now:

The drama is expected to return later this year – in fact, virtually everyone seems to have accept that the special is going to be a Christmas episode, there’s no official word on this subject as yet. Vertue says this is because the Sherlock team doesn’t really know anything about scheduling until the BBC tells them, and they haven’t made any official pronouncements on the subject yet. (The smart money is still on Christmas, IMO.)

However, the Sherlock team did announce that the special will screen in cinemas as well as air on television, and it was once again stressed that “the aim is to get closer and closer” when it comes to the UK and US premiere dates.

As far as the special episode itself is concerned, Moffat says: “It’s one of the best ones we’ve made. I think it’s really terrific.”

(And after that tiny little clip, I kind of believe it. So meta and funny!)

Before the panel started properly, there was also a special video message from a few of the Sherlock stars who couldn’t make the trek to San Diego, including Andrew Scott, Mark Gatiss and, yes, Benedict Cumberbatch. (It’s also hysterical.)

For everyone waiting on news of Season 4 though, well – we’re going to have to be patient a little while longer. Though Moffat stated that they knew what stories they wanted to tell in the next full season of Sherlock none of the episodes have been written yet. So, the wait continues.

Thoughts on the first clip from the Victorian special? Especially John’s moustache and/or Sherlock’s amazing outfit? Hit the comments and let us know. '