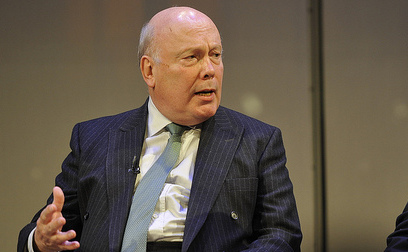 Yes, Downton Abbey is ending after next season, but creator Julian Fellowes already has his next iron in the fire.  The man behind the megahit costume drama is set to adapt another period piece, based on Anthony Trollope’s novel Doctor Thorne.

The novel tells the story of Thomas Thorne, who lives in the village of Greshamsbury in Barsetshire, with his beautiful niece, Mary, a girl blessed with every gift – except, as it always seems to go in these instances, money. Mary Thorne has grown up alongside the Gresham sisters – Augusta, Beatrice and Alexandrina and their handsome brother Frank – whose home is the great house and estate at Greshamsbury Park.

When the terrifying Lady Arabella Gresham discovers that her darling son, Frank, has fallen in love with Dr Thorne’s penniless niece, she is horrified and drama ensues. It turns out that her husband has frittered away the family fortune and the Greshams are only being kept afloat thanks to very favorable loans that Dr Thorne has secured from a railway millionaire, Sir Roger Scatcherd. However, Sir Roger is drinking himself into an early grave and the financial future is uncertain, so Lady Arabella believes it is her son’s duty to make a rich marriage to save the family estate and launches a campaign to secure her son an heiress for a bride.

Fellowes – who is apparently a big fan of Trollope – will adapt the novel, and the announcement coincides with the 200th anniversary of the author’s birth.

“As a lifetime devotee of Trollope, my own favorite among the great nineteenth century English novelists and certainly the strongest influence over my work that I am conscious of, it is tremendously exciting and satisfying to know that my adaptation of one of his best-loved novels is coming to ITV,” Fellowes said. “I could not be more delighted."

Filming on the three-part series is slated to begin later this year.

“We’re delighted to be working with Julian once again on the drama Doctor Thorne,” said ITV Director of Drama Steve November. “It’s a rich and multi-layered story of class and social standing and a timeless love story which Julian has brought to life brilliantly with his inimitable wit and warmth.”

Confession time: I was never a big fan of Trollope’s and I’m completely unfamiliar with this story. But, Fellowes lives to write about class issues – see also: virtually everything else he’s ever made – so this seems like a good match.

No word yet on whether we can expect to see Doctor Thorne broadcast in the States, but given Fellowes immense popularity thanks to Downton, it seems a fairly safe bet that we’ll see it at some  point. \

Are any of you Trollope fans? I'm not super familiar with this story, but I'm curious!