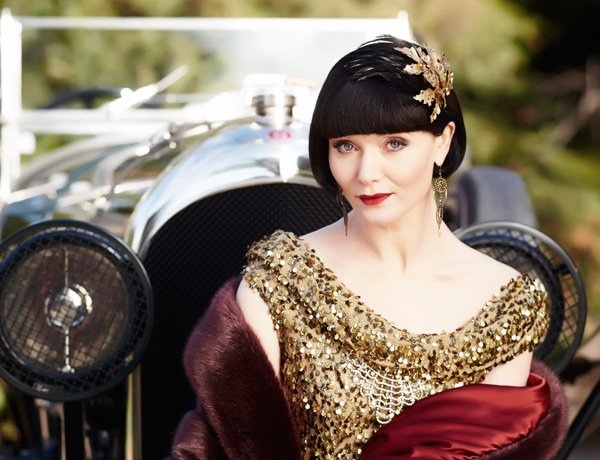 Based on the best-selling novels by Kerry Greenwood, the drama follows the adventures of a glamorous female detective in 1920s Australia who battles injustice with a sharp wit and a pearl-handled pistol. Essie Davis plays the fabulous Phryne Fisher, opposite Nathan Page as Detective Inspector Jack Robinson, Ashleigh Cummings as Miss Fisher’s loyal companion and assistant Dot and Hugo Johnstone-Burt as Constable Hugh Collins.

Miss Fisher has been rather popular in America since the first two seasons started airing on public television stations around the country, as everyone swoons over Phryne’s amazing outfits and ongoing flirtation with Jack. And fans everywhere have been clamoring for more ever since the news broke that the drama had in fact been renewed for a third season. (I’m not kidding. That’s one of the most popular posts on this blog!)

And, now, at long last, there’s an actual trailer for Season 3. Sort of. It’s something, anyway.

Before you get your hopes way up, there is basically no new footage in this teaser, just Davis addressing the camera directly - though Miss Fisher herself does drop a few hints about particular things we’ll see in Season 3. And, as always, her outfit is completely on point.

Update: Wait, a little industrious YouTube research has turned up an official trailer for Season 3 – it’s very short, but contains a few snippets from the new episodes (and one particularly great line from Phryne):

Still - better than nothing, yeah?

Season 3 begins this May in Australia on the ABC. When that means we might see the third season for ourselves here in the US is a bit less clear – but hopefully the show’s growing popularity here in the States will help encourage the powers in charge of such things to make the gap between the two airings as small as possible. (We hope. Fingers crossed.)  We’ll certainly keep you posted as soon as we hear anything about a potential third season US airdate!

Are you excited about the prospect of more Miss Fisher/?