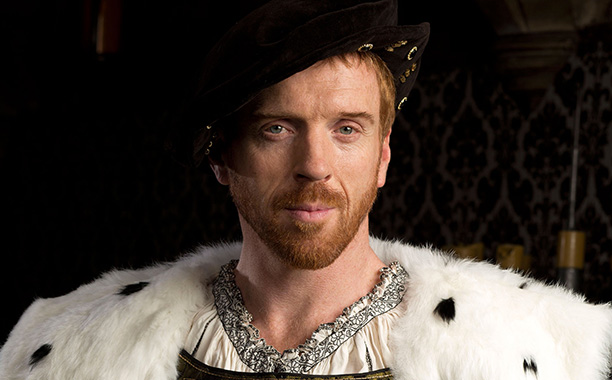 Damian Lewis as King Henry VIII in "Wolf Hall". (Photo: BBC)
The BBC has released the first trailer for the highly anticipated Tudor drama Wolf Hall, which will adapt author Hilary Mantel’s bestselling pair of Booker Prize-winning novels (Wolf Hall and its sequel Bring Up the Bodies) for the small screen.

The six-part drama will follow the meteoric rise of Thomas Cromwell, from lowly blacksmith’s son to one of the most powerful men in England as chief advisor to King Henry VIII. Cromwell was one of the main architects of the English Reformation, helping to engineer the dissolution of Henry’s marriage to Katherine of Aragon so that he might marry his mistress Anne Boleyn. Cromwell was also instrumental in negotiating Henry’s fourth marriage to Anne of Cleves, and instituted widespread, extensive religious reforms.

The cast is comprised of an all-star collection of awesome British actors, including Tony and Olivier Award-winning actor Mark Rylance as Cromwell, Homeland’s Damian Lewis as Henry VIII, Upstairs Downstairs’ Claire Foy as Anne Boleyn, Call the Midwife’s Jessica Raine as Jane Rochford, Jonathan Pryce as Cardinal Thomas Wolsey, Sherlock’s Mark Gatiss as Bishop Stephen Gardiner and many more.  And, if this first look is any indication, they all seem perfectly cast.

Thus far, this series looks wonderfully dark and moody, which is exactly how I like my Tudor dramas. Rylance and Lewis look particularly excellent in this footage.

Wolf Hall is set to debut on BBC Two this January, with an American airdate set for early April on PBS’s Masterpiece.

Thoughts on the trailer? If you’ve read the novels, how do you think this looks as an adaptation?