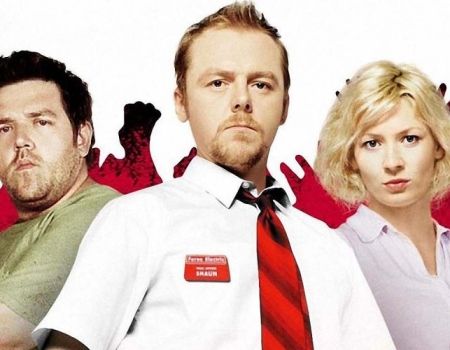 The "Shaun of the Dead" lead trio (Photo: Universal Pictures/Studio Canal)
Halloween is just around the corner, that time of year when it’s fun to be scared. Or so they say. I’m not a big fan of traditional horror films, but I’ve found that those with a decidedly pronounced sense of humor can be quite entertaining indeed. At the very least a light, funny moment here and there can make all the blood and gore a little easier to take. Shaun of the Dead is probably the best example of a horror flick with an equal amount of comedy.

However, ten years after its release Shaun is a classic of this blended genre and you, my dear thrill seekers, are perhaps looking for something a bit more under the radar. The following is a list of horror comedies you can find on-line to satisfy your craving for a “dead funny” film.

Grabbers. First, mutilated whales wash up onshore at Erin Island. Soon after a flurry of local residents go missing. Disillusioned Garda O’Shea (Richard Coyle) and his eager new colleague, Garda Nolan (Ruth Bradley), are faced with the almost inconceivable fact. Their small community is under attack by a bloodsucking colony of aliens the locals have nicknamed “Grabbers” due to their tentacled appendages and tendency to grab their victims.

Resident marine ecologist Dr. Smith (Russell Tovey) witnesses the town drunk surviving an attack by the sea-dwelling monsters and hypothesizes that alcohol is toxic to the Grabbers. Before the Gardai can contact the mainland for help, a storm closes in on the island bringing with it more of the newly hatched lethal creatures. The islanders must resort to plan B - head off to the pub to ride out the impending catastrophe.

Grabbers is a UK/Irish production with a moderate amount of blood, gore and jumpy moments. The amusing premise of the aliens’ Achilles heel provides the majority of the comedic moments. If you like monster movies that capture your attention without giving you nightmares, you might want to check out Grabbers streaming on Netflix.

Stitches. I can’t promise there won’t be some sleepless nights after watching this selection. Stitches (Ross Noble) is a children’s party clown. Yes, I said the “c” word. As if being heckled at a 10-year-old’s birthday isn’t bad enough, one naughty party guest ties Stitches’ shoe laces together causing an unfortunate and fatal accident.

A few years on, the same birthday boy, Tom (Tommy Knight) who is now almost 17, is contemplating a much more adult party.  As teenagers will do, his friends take things into their own hands inviting guests via the internet. But the one person they could never imagine showing up for the festivities is -you guessed it – Stitches, raised from the grave by some sort of voodoo clown ritual.

If you like gory slasher films with a comical side, Stitches might be your cup of tea. Netflix, Hulu and Amazon Instant Video have this movie available to stream. Coulrophobics (those with a fear of clowns) steer clear!

Cockneys vs Zombies. In Cockneys vs Zombies a gang of young bank robbers organize a heist that will score them enough cash to save their grandfather’s retirement home from demolition. The problem is that while our misguided but well-meaning thieves are being handed the money by a corrupt bank official, all of East London is being overrun by a quick-moving zombie outbreak. So their problem becomes, not the police who have been ravaged by the undead, but getting to the retirement home to rescue their granddad and his friends before the zombies get them first.

There has been an abundance of zombie movies out there over the past few years. What makes this particular story stand out is the humor created by the senior citizens’ unlikely role as zombie fighters. While not without its grisly moments, this flick is less fright and more folly. Stream Cockneys vs Zombies on Netflix and Amazon Instant Video.

Doghouse . Doghouse tells the story of Vince (Stephen Graham) a man who is rather down about his impending divorce. His mates decide they all need a boys’ night out to help them forget about their women troubles. Unfortunately, the town they choose for their carousing is inhabited a large contingent of man-hating cannibals.

Doghouse features an impressive cast which includes Inspector George Gently’s Lee Ingleby, Doctor Who’s Noel Clark and Utopia’s Neil Maskell. A humorous take on the battle of the sexes mingled with an offshoot of the zombie genre, you can get find this title through the Netflix DVD collection.

Severance. My final selection was called a "mischievous blending of The Office with Friday the 13th” by Rolling Stone reviewer Peter Travers. Severance follows employees of a multi-national weapons company on a harrowing team-building retreat in the mountains of Eastern Europe. One by the one, the staff is picked off in gruesome ways by their unknown assailants. Someone has a grudge against the Palisade Defense Corporation and their employees are paying dearly for it.

This European hybrid stars British actors Toby Stephens, Tim McInnerny and Danny Dyer.  Amazon Instant Video is the only place to stream this movie at the current time.

It’s my hope these films provide as many treats as tricks for those who enjoy some levity with their abject terror and carnage. If you have any other recommendations, please share them in the comments below. Happy Halloween!