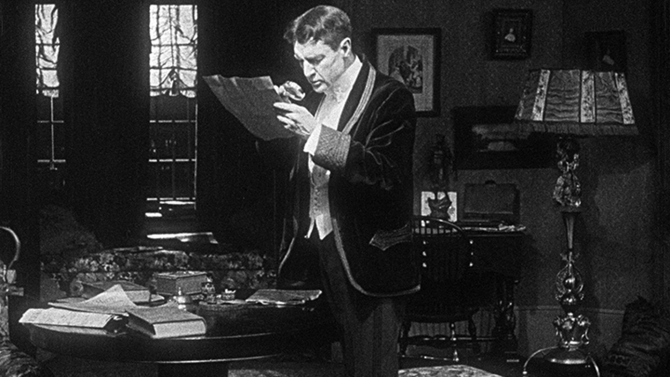 William Gillette as Sherlock Holmes in a still from the 1916 film. (Photo: San Francisco Silent Film Festival)
Rejoice, Sherlockians of the world – there’s been a rather amazing discovery in the world of Sherlock Holmes over the past week. A nearly 100 year-old silent film version of the great detective has been discovered in the vaults of the Cinémathèque Française, the Paris-based archive that houses one of the world’s biggest film collections.

Entiltled Sherlock Holmes, the film stars the well known American actor-manager William Gillette and is an adaptation of the play that Gillette was famously associated with. This play – and subsequently the film – is something of an amalgamation of elements featured in Sir Arthur Conan Doyle stories, including A Study in Scarlet, The Sign of Four, The Boscombe Valley Mystery and The Greek Interpreter.

The supposedly lost film was uncovered while staff were working on an ongoing project to catalogue the 80,000 boxes of nitrate films in its collection. It had previously been catalogued incompletely and apparently was mistakenly put with other Holmes films.

Restoration is being undertaken in Bologna, Italy, by the Cinémathèque Française, in conjunction with the San Francisco Silent Film Festival. “William Gillette’s Sherlock Holmes has ranked among the holy grails of lost film, and my first glimpse of the footage confirms Gillette’s magnetism,” said Robert Byrne, president of the San Francisco organization.

This film is the only record of Gillette’s performance as Holmes, which popularized the now-infamous image of the great detective sporting a deerstalker, wearing a cape and carrying a pipe.

Bryony Dixon, curator of silent film at the British Film Institute, said it was "top of the list" in the canon of missing Sherlock Holmes films, so is a "pretty exciting" find.

The restored film will premiere at Toute la Mémoire du Monde, the film restoration festival of the Cinémathèque Française, in January 2015, and will see its U.S. debut at the San Francisco Silent Film Festival in May 2015.