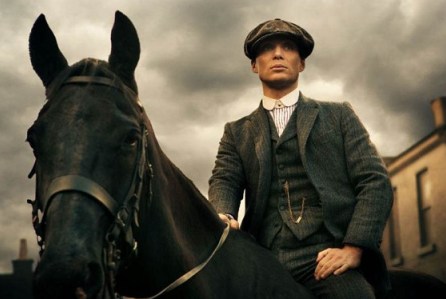 Cillian Murphy in "Peaky Blinders", complete with the infamous titular hat. (Photo: BBC/Netflix)
It would seem that Netflix is becoming quite the home for British television in America these days – after the online streaming service brought contemporary crime dramas The Fall and Happy Valley across the pond, the site has now moved on to more a bit of period crime fare.

Netflix has locked down exclusive rights as the US distributor for the popular British drama Peaky Blinders, a six-part factually-inspired series that follows the story of the Shelby family in Birmingham in 1919. These were the leaders of the violent Peaky Blinders gang, whose members were notorious for sewing razor blades into their hats – which also happens to be where their nickname comes from.

Watch a trailer for the first season’s Netflix debut below:

(If you’re super curious you can compare that with the original BBC trailer here.)

“Peaky Blinders captivated audiences in the U.K. with its compelling story lines, powerful performances and stunningly beautiful imagery,” said Netflix’s Chief Content Officer Ted Sarandos. “We cannot wait for our US audience to experience the series for the first time on Netflix.”

You can watch Season 1 on Netflix now.

An additional incentive to try out Season 1 of Peaky Blinders Is the promise of *Season 2* of Peaky Blinders, which premiers in the UK today (October 2), and will arrive on Netflix streaming this November. The bonus of more Blinders episodes aside, the second season welcomes (dishy) Inception star Tom Hardy to the cast, along with Noah Taylor and Charlotte Riley.

Check out the BBC Two Series 2 launch trailer below:

What do you think? Does Peaky Blinders sound like something you’d try? (I've already put it in my queue!)