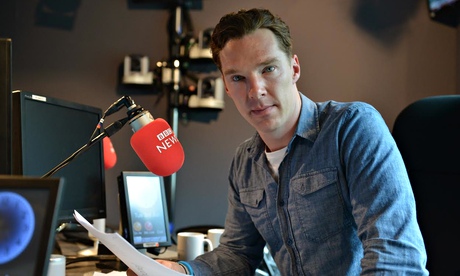 The first British and American airborne troops began landing in France shortly after midnight on D-Day, and the storming of the Normandy beaches began around 6:30am. News of the attack did not arrive for several hours, given the fact that there were strict wartime censorship rules to prevent journalists from providing the enemy with sensitive military information.

The D-Day news bulletins will be broadcast at the same time of day as the original transmissions. The commemoration began this morning with Cumberbatch reading the 8am bulletin on Radio 4, and will continue through the weekend, as the landings continued, ending at 9pm on Sunday night.

Listen to a selection of these recordings below, including the initial announcement that the D-Day invasion had officially begun (it’s Stewart’s, if you’re looking for it):

You can also see scans of the hand-annotated radio news scripts from D-Day that go along with each transmission while you listen. This is the first time they have been available online as a set.

The new recordings – there are eight of them – are all available on the the BBC Radio 4’s special D-Day Reports website.

Their whole D-Day site is really fantastic actually and well worth a look around as we mark the anniversary of this momentous occasion in history.