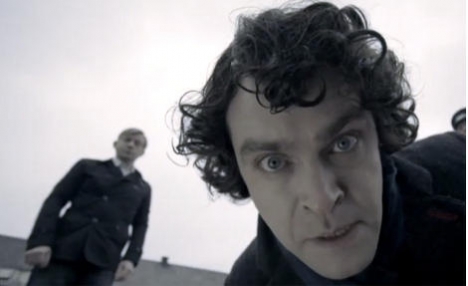 Vidar Magnussen in the role of Sherlock with Bjarte Tjøstheim in the background. (Photo: NKR, Screen Grab from YouTube)
We’ve certainly seen many creative Sherlock parodies over the years – from musical adaptations, to snarky cartoons, to detailed and realistic mash-ups with fellow Steven Moffat production Doctor Who.

This latest parody – which comes to us from Norway and has become something of an instant classic among members of the Sherlock fandom online – is a bit simpler, in terms of concept, but in no way less memorable. (Or creative.)

Norwegian actors Vidar Magnussen and Bjarte Tjostheim – who star on the show Underholdningsavdelinge - came up with the idea to do the spoof once they realized they looked a bit like British stars Benedict Cumberbatch and Martin Freeman.

But they definitely take things to a whole ‘nother level of silliness.

The clip features murder, impossibly improbable deductions, occasionally nonsensical dialogue and a rather intense relationship between Sherlock and John. So, not that entirely different form the show itself then, really. (Except for that one bit where it really is.)

Warning: If the title up there didn’t convince you already, this is my official reminder that these videos are totally NSFW and quite a bit crass, so you shouldn’t watch them at your office, or around children, or basically near anyone that gets offended by adult language and/or sexual innuendo. Just so you know.

All that said, it’s absolutely hilarious and oddly adorable at the same time.

Magnussen and Tjostheim also recently released a sequel video, which basically takes everything that’s kind of inappropriate and crass and hilarious about the first one and turns it all up to eleven.

I really hope they make another one of these – I’d love to see their take on His Last Vow. Also, just because it’s this weird combination of gross and totally inappropriate and cute at the same time yet somehow really works. (At least for me anyway, we’ll see how many of you all like it.) Well done, Norway!