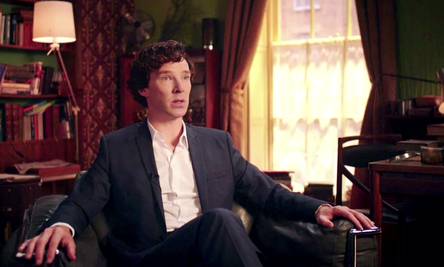 As you may have heard, new behind-the-scenes documentary Unlocking Sherlock is streaming online in full prior to its on-air debut January 12, and it takes a look at how popular mystery series Sherlock came to be. This is, of course, all completely well and good and fascinating – the film is a totally worthwhile way to spend an hour or so of your time.

However, if you’re a Sherlock fan, what you probably really want to know about after a two-year hiatus is as much scoop as humanly possible on the new episodes, and what Series 3 will look like. Luckily, you can have the best of both worlds.

A new Sherlock behind-the-scenes clip has been released – this time focusing on the creation of Series 3. Stars Benedict Cumberbatch and Martin Freeman weigh in from the 221b Baker Street set, along with co-creators Steven Moffat and Mark Gatiss and producer Sue Vertue,  offering tantalizing insights and quite frankly maddening teasers about the new season.

Sadly, the clip’s only two-and-a-half minutes long, but at this point anything is like water in the desert. Watch for yourselves below:

Sherlock premieres in the UK on New Years Day and returns to Masterpiece shortly thereafter, on January 19. You can watch the mini-episode prequel Many Happy Returns here.

What are you most excited to see in Series 3?