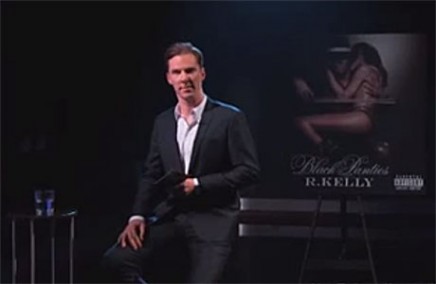 Benedict Cumberbatch, music star. Sort of. (Photo: ABC video screenshot)
Should Sherlock star Benedict Cumberbatch decide he doesn’t want to be an actor anymore, he might just have a future in the music business.  Or poetry. Or both.

We’ve already seen him read Snoop Dogg lyrics in an Alan Rickman voice with late night host Jimmy Fallon, so we know he’s passingly familiar with hip-hop. Next up, he tackles the often baffling, generally uncomfortable and occasionally frightening work of R&B singer R. Kelly.  And you’ll want to watch it. No, really. You will.

Cumberbatch is currently doing the promotional rounds in support of the imminent release of The Hobbit: The Desolation of Smaug, in which he provides the voice of the titular great dragon. He appeared on ABC late night chat show Jimmy Kimmel Live this week,  during an episode in which Kelly was also scheduled to be a guest. Kelly’s forthcoming album, titled Black Panties, has already become something of an internet sensation, thanks to its largely crass – and, quite frankly, totally crazy – lyrics.

Kimmel had Cumberbatch – and his distinctive baritone voice – perform a dramatic reading of the song Genuis off of Kelly’s upcoming album and it’s simultaneously hilarious and vaguely terrifying, by which I mean all-around wonderful.  The dramatic pauses! The serious actor pose! There’s even a wink in there.

In short: Stop what you are doing and watch right now.

Seriously, this bit is incredible enough that you might just forgive Kimmel his trainwreck of an Oscars telecast in gratitude for making this happen.

Once you’ve collected yourself – and watched it two or three more times, we aren’t judging – you can see Cumberbatch’s full Kimmel interview below.

Can we just give Cumberbatch like eighty more roles if only so he has to go out and promote them? Please?