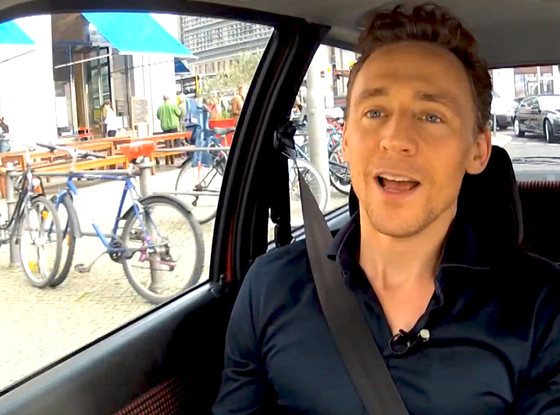 Everyone is in love with Tom Hiddleston right now, huh? Even yours truly – loyal member of the Cumbercollective as I am – isn’t completely immune to the incredible charm rays and general adorableness of Hiddleston, who seems to be on some sort of worldwide mission to prove that he is, in fact, the perfect man.

And if that mission includes performing semi-embarrassing karaoke in a tiny automobile, well, Hiddles is up to the challenge. (Seriously, this video will make your day. I promise.)

Basically, all you need to know is that Hiddleston appeared on some random German web series called  Stars in Cars, which is basically exactly what it says on the tin, a little mini-chat show which takes place, you guessed it, in a car. Hiddleston is present ostensibly to talk about his recently released new film, Thor: The Dark World, but instead spends a lot of time juggling, drinking beer, and yes, singing.

Also, hey, Tom Hiddleston apparently speaks some degree of German, because the internet wasn’t already obsessed with him enough:

But the best part is the bit where Hiddleston wonderfully and terribly belts out Ben E. King’s classic Stand By Me.

HIddleston basically needs his own variety show at this point, yes?