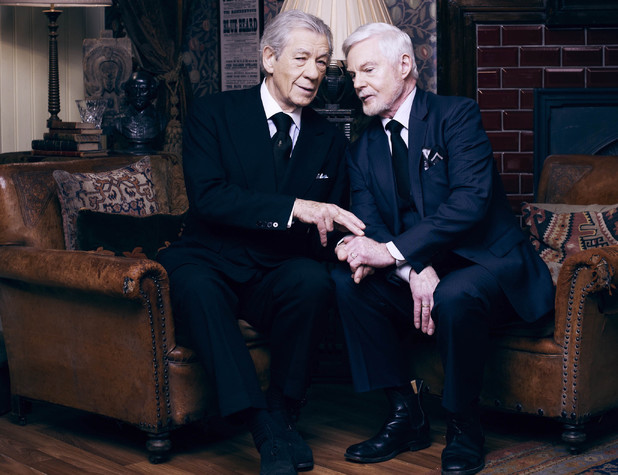 Ian McKellen and Derek Jacobi will be on PBS stations next summer. (Photo: ITV)
It’s official: The first season of gay sitcom Vicious –starring acting legends Sir Ian McKellen and Sir Derek Jacobi – will be making its American debut next year. According to Deadline, Shine International has closed a deal with PBS to bring the comedy to local stations nationwide in 2014.

The comedy, which follows the adventures of an elderly gay couple who have been living together in the same Covent Garden flat for nearly fifty years.  An incredibly co-dependent duo, they spend most of their time bickering and walking the dog, but the couple finds their lives turned upside down with the arrival of their new young upstairs neighbor.  Harry Potter’s Frances de la Tour  and Game of Thrones’ Iwan Rheon also star.

Vicious bowed in the UK to mixed reviews but strong ratings, premiering as the highest-rated comedy launch of any UK channel in 2013 at the time of its airing. It went on to average around 3.4 million viewers an episode, which isn’t exactly Downton Abbey numbers, but is certainly nothing to sniff at either.

Watch the UK trailer below.

Vicious has already been renewed for a second season by ITV, and a Christmas special is slated to air in the UK later this year. (It seems safe to assume that this holiday episode will be tacked on to the end of the American run when that happens, but that’s an unofficial bit of speculation.)

There’s no word on when Series 2 is expected to air, though Jacobi himself has hinted that we might be in for a bit of a wait due to his co-star’s busy schedule.  McKellen is currently starring in a Broadway production with Sir Patrick Stewart and has also signed on to play the great Sherlock Holmes for director Bill Condon’s upcoming adaptation of A Slight Trick of the Mind. So, we’ll have to wait and see how that shakes out.

The show, which was originally known as Vicious Old Queens before it got a name change that I still wish hadn’t happened, marks an interesting foray into comedy for PBS, and a trend that we can only hope continues. (There are dozens of popular Britcoms that could use a path to American audiences, so let’s cross our fingers, shall we?)

Thoughts? Are you excited to see Vicious? Do you think PBS should consider importing more British comedies?