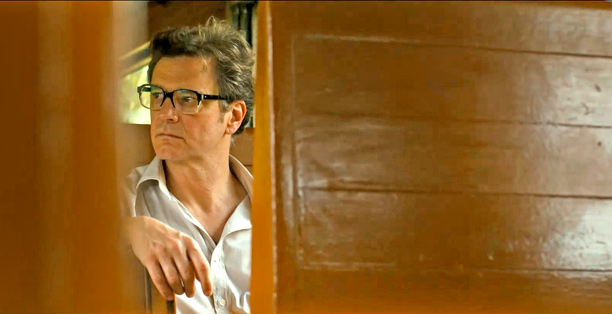 Colin Firth in 'The Railway Man' (Photo: Lionsgate)
Who wants to watch Colin Firth probably scoop up some more statues this awards season? Who doesn’t, right?

Firth, who’s not really made a big movie since his Oscar-winning turn as King George VI in The King’s Speech, is headed back to a multiplex near you. (And, yes, I know he was in Tinker Tailor Soldier Spy the year after, but that film was an ensemble of Epic British Talent, not a starring vehicle for him, and it got shamefully overlooked at Oscar time to boot. Not that I am bitter about that still or anything. Much.)

Anyway. This time, Firth is starring opposite fellow Oscar winner Nicole Kidman in a film called The Railway Man. Based on his best-selling memoir, the film tells the true story of Eric Lomax, a British Army officer who had been tormented as a prisoner of war at a Japanese labor camp during World War II. Decades later, Lomax discovers that the officer who tortured him is still alive, and sets off to confront him.

Here’s the trailer, which was just released last week.

Although it looks like a film that is probably going to put you through the emotional wringer, it also looks rather fantastic.

The Railway Man also stars Stellan Skarsgaard, Jeremy Irvine, Sam Reid and Tanroh Ishida. The film premiered at the recent Toronto Film Festival and does not have a set release date yet, though I think we can all assume that it will be out in some limited form in time to sneak under the wire for awards consideration. Because it’s probably going to be up for a few.

Thoughts? Does this film look interesting to you?