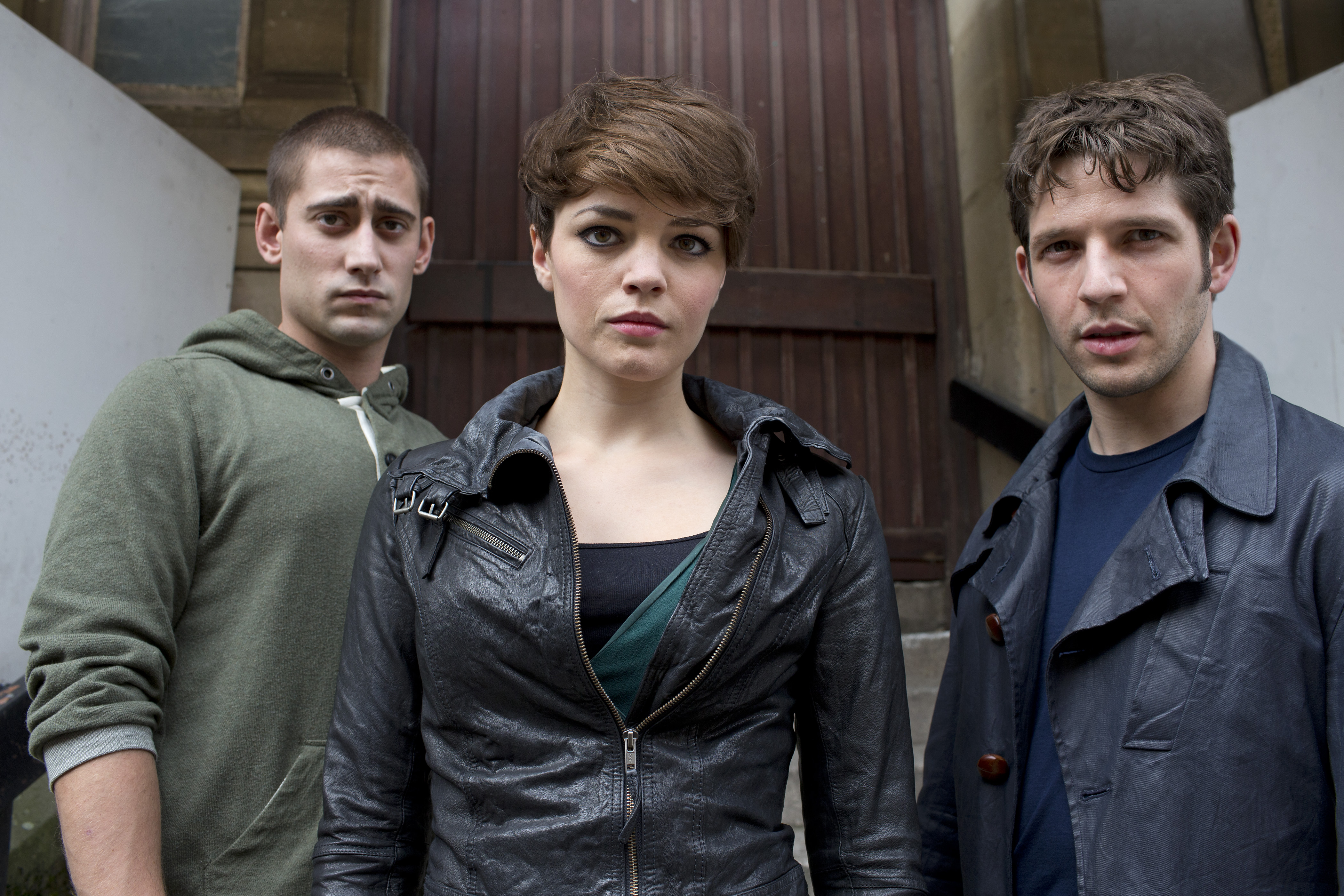 In the beginning there was George, a bewildered werewolf; Mitchell, the tortured vampire who befriends him; and Annie, the lonely ghost whose house in Bristol George and Mitchell find to let. After a bit of adjustment, these three paranormal black sheep learned to support and encourage one another in their attempts to “be (more) human.”  However, at the end of Series 3 the trio starts to fall apart quickly. First we see the departure of desperate, defeated vampire John Mitchell.  Actor Aidan Turner had to go off to Middle Earth to play a dwarf for a few years so his exit came as no surprise. Then, right on the heels of Mitchell’s sad end, besieged werewolf George sacrificed his life in the first episode of Series 4 because Russell Tovey had decided to explore other options as an actor. Fans were left wondering whether Annie’s (Leonora Critchlow) ghostly antics alone would be enough of a reason to continue watching the show.

If this was the case for you, I’d like to take this opportunity to convince you to stick with the series because I feel it accomplishes one of the best cast turn-overs I’ve ever seen. While it’s very clear the trinity of a werewolf, ghost and vampire is fundamental to the show, the writers didn’t just substitute impersonators - the same supernatural with a different face. They created characters that were unique and interesting in their own right and, I felt, worthy of my time. Let’s compare and contrast, shall we?

Our original werewolf, George Sands, is an educated, tender-hearted man who is prone to shrieking in stressful situations. George was brutally attacked on a hiking holiday in Scotland.  After he realized the curse that had stricken him, he allowed his family to believe he was dead. He went into hiding until he met a most unlikely ally, eventually forming a close friendship with Mitchell, who as a vampire should have been his mortal enemy. Although he tried to live as normal a life as possible, George felt ashamed of the monster he became each full moon and took every possible precaution to keep innocent bystanders safe during his transformations.

Alas, he inadvertently scratched Nina, the woman he had fallen in love with, and thus had to endure her lingering bitterness and his own guilt for the rest of his life.

Tom McNair, on the other hand, is an impressionable and naïve young man, raised by a surrogate father whose sole purpose in life was to seek retribution and hunt down vampires. He essentially home schooled Tom to be a killer.

When the elder McNair died in a revenge attack on a vampire, Tom was invited to stay on with Annie and the others, now living in the south of Wales in an old B and B called Honolulu Heights. After George’s death, Tom took on a caretaker role for George and Nina’s baby, Eve, the foretold War Child whose fate is linked to the fate of the vampires. Though his life is far from ordinary, he dreams of doing the things normal people do – going on holiday, having a birthday party, and courting a girl, preferably a solicitor.

George and Tom share the essential qualities of loyalty and a strong sense of morality.  They are humble, unselfish and eager to please, all very canine qualities indeed.

John Mitchell was a solider in the First World War when he was “recruited” by a vampire named Herrick.  Handsome and charming, Mitchell served as Herrick’s right hand man for years and indulged in a lifestyle of blood lust and murder. Eventually though, he tired of this destructive culture. Since joining up with Annie and George, Mitchell has tried to live a more normal life. Even when his intentions are good, however, there’s always the menace of emotion, and therefore violence, just below the surface.

Eventually Mitchell is provoked by a religious group’s attack on the local vampire headquarters and retaliates by murdering twenty people on a commuter train. From there on out, Mitchell is in a constant state of paranoia, trying to conceal his guilt from his friends while simultaneously attempting to escape a prophecy that says he’ll be killed by a wolf-shaped bullet. Exhausted, Mitchell finally takes his destiny into his own hands.

After Mitchell’s departure, a new trio of supernaturals appear at Honolulu Heights - an elderly werewolf, a crinoline wearing ghost and a sulky vampire. Leo, the werewolf passes away and Pearl, the ghost resolves her unfinished business so Hal is left behind in a house which is down one vampire. He grudgingly agrees to stay on to help protect baby Eve as well, but makes it quite clear that he follows a very regimented schedule in order to keep himself from doing harm to humanity.

While obsessed with keeping busy, Hal is also something of a closed-off recluse. Even his dress sense belies his need to stay buttoned up and in control.  With Leo’s help he’s been blood-free for 55 years and he intends to stay that way.

Mitchell and Hal, being vampires of some repute, are older than they appear which makes them world-wise and world-weary. Though they both have tried to live without blood for extended periods of time, neither has been able to kick the habit for good. This knowledge puts them constantly on edge and keeps them in hiding from other vampires who would like persuade them to rejoin their ranks.  In the end, they realize they are doomed regardless of any prophecy.

Annie is organized, honest, nurturing and fiercely protective.  Above all, she puts her trust in those she loves. She’s the heart of the house (and the heart of the show). So when she ends up murdered and abandoned in her home, the novice ghost feels lost and useless.  When new tenants George and Mitchell move in and can actually see her, it gives her confidence a boost.  Annie feels ready to make her presence known... and she finally has someone to make tea for.

Being Human Preview - He Can See Me! - BBC Three

Despite her grisly end, Annie is an optimist.  With the help of her friends, she finds the courage to work out her unfinished business. Annie has several false starts and eventually she gives up on ever passing over.  She has the savior of the world to protect after all. Through her selfless love and fierce protection of baby Eve, the purpose of her life and death are revealed and she is amply rewarded when she finally crosses over.

Alex is the newest supernatural in the series, a feisty Scottish lass with a quite a direct manner. We know she is the sole female in a family of rambunctious brothers and a useless father and, therefore, tends to be a bit of a tomboy. She was murdered by Cutler, a vampire adversary of Hal’s and she’s none too happy about that. Now as series 5 begins, Alex is intent on discovering her unfinished business and is being quite proactive about it.

It’s hard to know how well Alex will be able to step into Annie’s saintly shoes. Having been deserted by her own mum, we know Alex took over those responsibilities for her brothers so she definitely has Annie’s mothering instincts.  Perhaps that’s the most important quality for a ghost, to watch over people and protect the innocent.

If this unintended epic has revived your interest in Being Human, the first four series can be found on Netflix and Hulu.  Don’t worry; you can fit in a catch-up marathon before the final series ends! Get to know newcomers Tom, Hal and Alex.  I promise you won’t be disappointed.

Being Human Why You Should Watch