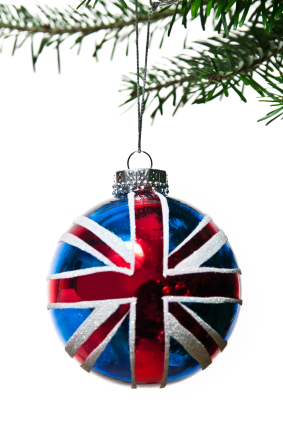 This is a slightly updated version of a post from Christmas 2011. But, since Christmas crackers and mince pies are always awesome in my opinion, it seemed worth sharing again. Hope all of you are having a wonderful Christmas Eve!

Most of the biggest – well at least most important and/or most popular – Christmas traditions in Great Britain are…shall we say very well established, with many having been around in some form or other for hundreds of years. There are certainly more great British Christmas activities that didn't make this list - for example, the Top of the Pops Christmas Number 1 is something that's always fun to speculate about at this time of year, but these are some of the most prominent.

Christmas Dinner. The Christmas feast in Britain tends to look like a lot our American Thanksgiving, with turkey being the most common main dish (though the internet tells me that goose is apparently making a comeback – does anyone know if that’s actually true?).  The Christmas roast dates back to the court of King Henry VIII, though the main dish during that time (at least for the 1% like Henry) would have been something like peacock or swan, and lots of times these birds would be cooked and then served wrapped in their own skin and feathers – or sometimes even stuffed inside one another. As for modern day trimmings, the turkey is usually served alongside much the same sorts of fare that we’re used to on this side of the pond – carrots, roasted and/or mashed potatoes, cranberry sauce, and the one ubiquitous, truly British addition – Brussels sprouts.  The Brussels sprouts thing I don't pretend to understand, but go with it.

Mince Pies. Also known as minced pie, these are small sweet pies that are served all over the UK during the Christmas season. Historical fun fact: mince pies were actually banned in Britain by Oliver Cromwell during his Protectorate in the 17th century (mean!), but came back to popularity after the Restoration. The pies are made with mincemeat – which contains no meat at all – a mixture of dried fruit (currant, raisins, etc), apples, spices, sugar, brandy (usually) that's baked in small pastry shells. Remember, if you’re making mincemeat at home (here’s a recipe), have everyone in your house stir it, because it’s good luck.

Christmas Pudding. You know that part in “We Wish You a Merry Christmas” where everyone sings about bringing us some figgy pudding? Well, that’s a British thing. Much like a lot of other Christmas traditions, this one also has a very long history – apparently everything festive in the UK seems to be a holdover from some sort of medieval activity. The Catholic Church used to insist that puddings be made with 13 ingredients to represent Christ and his 12 apostles and claimed that all members of your family household should stir said pudding in an east-to-west direction while making it, to honor the journey of the Magi. Coins were also stirred into the pudding to bring luck in the new year. (People actually still do this, only the coins aren’t cooked with the pudding anymore as that’s a health hazard of some size, I expect.) Puddings are very dark and rich, made with dried fruits, spices, treacle and quite a lot of alcohol, and they take a fair bit of time to put together, in order to let your sherry or brandy or whatever you’re using really soak into the fruit.  Unfortunately, these are usually served at the end of the meal – and sometimes lit on fire - when everyone’s so stuffed from everything else that most people don’t get more than a few bites in, unless they go back for seconds.

Christmas Crackers. Probably my favorite British holiday tradition (well, other than the great telly, which we’ll get to in a second), Christmas crackers are basically a cardboard tube that’s covered in very bright paper. (It sort of looks a bit like a larger Christmassy Tootsie Roll.) Two people hold either end of the cracker and pull – the friction makes a small explosive pop (hence the name) and the cracker splits in half. Much like a wishbone, the cracker won’t divide evenly, and the person who ends up with the larger “end” is the winner, and gets to keep whatever’s inside the cracker. Typically these items include some sort of colored paper crown or hat, some small trinket, or a saying or (generally terrible) joke written on a slip of paper.

The Queen’s Message.  A more recent British tradition – well, recent is relative, but it’s less than 100 years old – is that of the Royal Monarch’s Christmas broadcast to the nation. This began in 1932 with a radio broadcast by King George V, who read a special message written by Rudyard Kipling. Enormously successful, the tradition continues to this day. Queen Elizabeth broadcasts her message every year on Christmas Day, and most people watch or listen to it after Christmas dinner. This is the Queen’s message from 2010, if you’d like to see what this sort of thing looks like. As an extra bonus this year, the Queen’s Message will reportedly be broadcast in 3-D, so I suppose if you have a 3-D television at home, it really will feel like Her Majesty has stopped by to tell you her thoughts on 2012 personally.

Christmas Telly. The main reason that I wish I were actually British during this time year is their longstanding tradition of producing special television programming over the Christmas holidays. Not only does it give everyone an excuse to collapse into a food coma on the sofa immediately following dinner, you actually get to see new episodes from a lot of great series. This year we get a plethora of fantastic options - Doctor Who, Call the Midwife, Mr. Stink, Restless, EastEnders, Coronation Street, Strictly Come Dancing, as well as the highly-anticipated Downton Abbey Christmas special and the series finale of Merlin. New episodes of popular comedies Miranda and Mrs. Brown’s Boys will air on Boxing Day.

Boxing Day. Boxing Day is a bank holiday traditionally celebrated on the day after Christmas (unless the day happens to fall on a weekend, and then everyone still gets Monday off anyway.). This holiday is secular in nature, though the day on which it is celebrated is also St. Stephen’s Day, a religious holiday. Boxing Day originated in medieval times when it was traditional for every parish priest to empty the alms box of his parish on the day after Christmas, and distribute gifts to the poor. (as well as for servants and tradesmen to receive presents from their employers, if you’re thinking Downton Abbey.)  Nowadays, Boxing Day is basically the British version of the American Black Friday – everyone gets the day off and heads to the shops for the sales, as evidenced by the fact that for many UK merchants, Boxing Day represents their single largest revenue day of the year. If shopping’s not your thing, this is also a popular day for watching football or rugby, as there are frequently matches between local rivals.

Pantomime. Pantomime is a musical-comedy theatrical production that dates from Restoration times. It frequently incorporates song, dance, buffoonery, slapstick, audience participation, singalongs, and mild innuendo that tends to go over the heads of the children in the audience.  Panto season generally runs from December to Februrary, but is particularly popular around Christmas and New Year’s, occurring in many cities, towns and villages around the country.  And a lot of them tend to feature a second tier celebrity or reality star as well – for example Priscilla Presley and David Hasselhoff are doing panto this season. Since this explanation is in no way doing justice to the hilarity that is this particular theatrical genre -  if you’re curious, go and check this site out which will show you everything that's running this season and give you a better idea about what it looks like, which might surprise you!