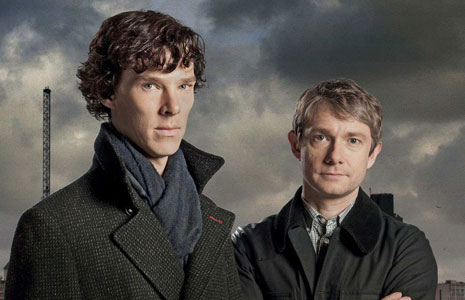 Sad news for Sherlock fans everywhere – we’re going to have to wait a bit longer than we originally thought for production on the highly anticipated third series of the hit drama to get started.

Entertainment Weekly is reporting that filming on Series 3 – originally slated to get under way this January – has been pushed back until March. Considering filming was originally supposed to wrap by the end of March, we’re probably now looking at something like June before principal production finishes up.

Since stars Benedict Cumberbatch (who’s apparently starring in every movie ever) and Martin Freeman (who’s now got to make a third Hobbit film) are basically the definition of superbusy, this news isn’t terribly surprising, even if it does make those of us who are waiting for a resolution to the Reichenbach Fall cliffhanger crazy.

So, what does this delay mean for an aidate? (Update: See below for the official word from producers on this topic.) Add in a couple of months (at least) to do post-production and music and whatever else needs to be put together on the backend and we’re looking at a UK premiere of early Fall at the absolute earliest. This of course isn’t that earth shattering, as the BBC has been fairly clear that they expected an early autumn transmission of Series 3 all along. But, when you add in a few other factors – the prospect of putting Sherlock up against ITV ratings behemoth Downton Abbey (also slated for Fall 2013), the unscheduled (and largely unknown) elephant in the room that is the Doctor Who 50th anniversary – things start to get a little bit murky. A late 2013 broadcast is certainly not out of the realm of possibility (so best to start preparing yourselves now). Of course, this also means that no one has any idea when we might see Series 3 screen in America. Early 2014? It’s possible. (As yet again – the spectre of Downton Abbey looms large. The costume drama has traditionally occupied the Masterpiece timeslot in January/February in the States.)  There’s nothing to be done for it but wait (some more) and see.

Update: Producer Sue Vertue has confirmed the delay via Twitter, but stresses that likely transmission dates remain unaffected. While this is comforting to hear – I expect that it is either wishful thinking (it seems unlikely a two month shooting delay wouldn’t push something back a bit?) or the original broadcast plan was always to hold the finished Sherlock until late 2013 regardless of when it wrapped filming. Either way, I suppose it’s at least a bit comforting to have some sort of confirmation about where things stand, even if it isn’t exactly what we wanted to hear (and even if this official update holds no real information for American Sherlock fans that could still be looking at a 2014 airdate regardless).

I think I need a shock blanket.