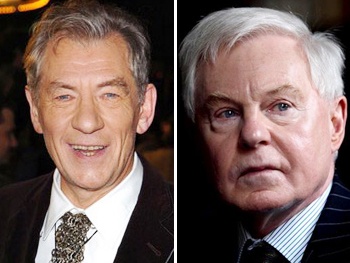 Two of the all-time British acting greats – and two of my personal favorites, generally – are joining forces in a new comedy sitcom for ITV. Legends Sir Ian McKellen (The Hobbit, The Lord of the Rings, X-Men) and Sir Derek Jacobi (I, Claudius, Cadfael, Doctor Who) are teaming up to star in gay comedy Vicious, a six-part series written by former Family Guy and Will & Grace producer Gary Janetti.

Apparently briefly titled Vicious Old Queens (a title that I admittedly loved to pieces and wish that they’d kept), the sitcom will feature McKellen and Jacobi as an elderly gay couple who have lived together in the same Covent Garden apartment for nearly fifty years. Long retired, the duo spends most of their time on boring arguments and petty bickering (and, one must assume, just being generally awesome.) Frances De La Tour (Rising Damp, Harry Potter and the Goblet of Fire) will play their best friend Violet. Plot details are fairly sketchy at the moment, but apparently the lives of Freddie (McKellen) and Stuart (Jacobi) will be turned upside down by the arrival of their new upstairs neighbor, Ash.

Just to give you a hint at my excitement level about this: Vicious is now basically my most anticipated series for next year, barring only the third season of Sherlock. There is simply no way that this isn’t going to be completely brilliant, with this kind of talent attached. Both McKellen and Jacobi are simply fantastic actors and one has to assume that getting them both agree to do a TV series (short a season as it is) is a pretty huge coup for ITV.

The existence of this sitcom at all is also a pretty bold choice for the network, despite the star power attached. While ITV soap operas Coronation Street and Emmerdale have both featured gay characters, greenlighting a show with gay leads is pretty rare. A sitcom such as this isn’t entirely groundbreaking, but it’s certainly uncommon and the network is justifiably proud of it.  "ITV is thrilled this exciting and bold sitcom, with stellar performers and writing talent is to join the increasing slate of new look comedy shows on the channel," said Myfanwy Moore, ITV comedy commissioning editor.

Both McKellen and Jacobi are openly gay themselves and both have lived with long-term partners for years. McKellen himself has stated that his orientation has helped him be a better actor, because he spent years “pretending to be someone else.” It will be interesting to see how much the actors own personal stories end up coloring their performances.

There’s little to go on out there that might indicate what sort of comedy Vicious will turn out to be – the press release calls it “wicked,” but will it fall in the dry and biting intellectual camp or lean more toward the campy side? Will it be an average situational comedy or more of a drama hybrid? We simply don’t know yet, but it’s hard to imagine that two actors of this caliber would have signed on if they weren’t confident of its likely quality.

No word on when Vicious will film, but internet rumors suggest an airdate at some point in late 2013. Countdown clock: on.