We’re ever so close to the premiere of Doctor Who Series 7 –  it was officially announced this morning that the sci-fi hit will return September 1 on both the BBC and BBC America. (Huzzah for same day and date broadcasting!)

Consequently, lots has been happening in the world of Who the past week or so, including the arrival of two brand new trailers, a screening of Series 7 premiere Asylum of the Daleks in London, the release of a bunch of new promotional images and the announcement of the first five episode titles.

Both the BBC and BBC America have released new trailers for Doctor Who’s return, and the two new clips are very different, tonally, from one another. (But, hey, it’s more new footage – no complaining from this corner!)

The BBC promo is pretty surprising in the best possible way – especially given the other trailer we’ve already seen that shows a lot of death and destruction and, well, exploding Daleks. So, what exactly is going on here?

Save the Daleks! - Doctor Who: Asylum of the Daleks, teaser trailer - Series 7 Autumn 2012 - BBC One

BBC America’s latest trailer focuses more on foreshadowing the overall arc of Series 7 – whatever it may be that prompts Amy and Rory’s eventual exit from the TARDIS this year. It includes seems to be quite a bit of footage from the Series 7 premiere, but also has bits from other upcoming episodes. It also looks awesome, in case you were curious.

In other news, I do quite like the movie-poster style onesheet image BBC America is using to promote Asylum – it’s pretty *and* really creepy! 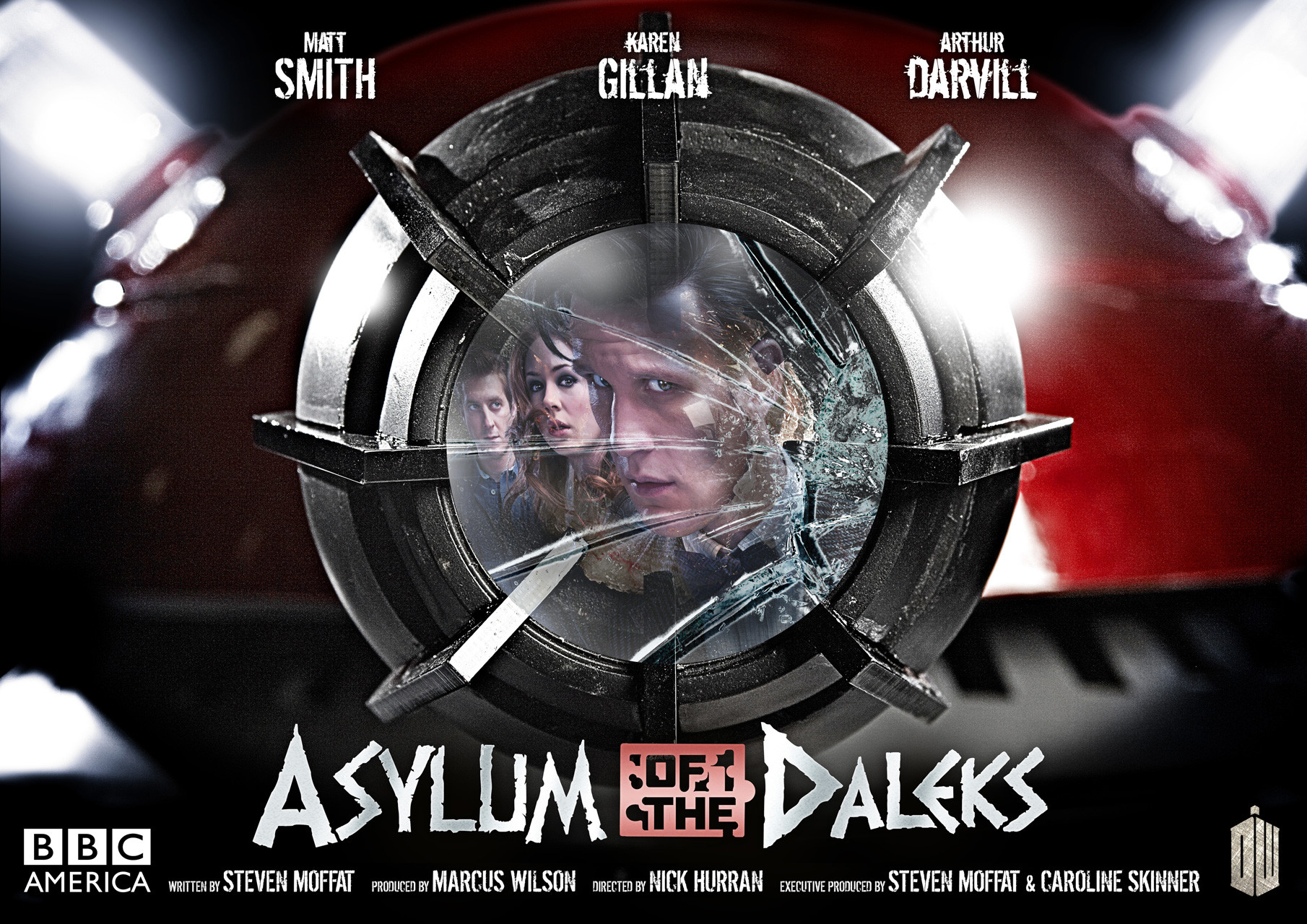 If you need more pictures to drool over, here’s a full gallery of new promotional images from Series 7 – most appear to be from the first three episodes - Asylum of the Daleks, Dinosaurs on a Spaceship and A Town Called Mercy, but that doesn’t make them any less awesome.

At this same event, Steven Moffat announced the titles of the first five episodes of Series 7 – most of these we’ve heard before, but the last two are new and intriguing. They are as follows – Asylum of the Daleks (written by Moffat), Dinosaurs on a Spaceship (written by Chris Chibnall), A Town Called Mercy (written by Toby Whithouse), The Power of Three (Chibnall again) and The Angels Take Manhattan (Moffat again).

Select fans and journalists were also treated to the premiere screening of Asylum of the Daleks last week at the British Film Institute. As I am crushingly jealous of all these people, I can’t really bring myself to talk about it, but if you’d like a few early (spoiler-free) reviews of the Series 7 premiere click here, here or here. Everyone who saw the episode seems to be quite taken with it and there reviews do make me quite excited for Doctor Who’s return, when I can manage to stop hating everyone that’s been lucky enough to see it already. There will be an advance American screening for those Whovians lucky enough to live in New York; it sold out in minutes (of course), but BBC America is planning to give passes away at some point this week.

In other, non-Series 7, but still interesting Who-related news:

Matt Smith Says He’s Staying ‘Till 2014. Make of that what you will. Is it true? (It is The Sun after all?) Is it clever misdirection? What of the upcoming 50th anniversary next year and all the internet rumors that it’s the perfect time for the Doctor to regenerate?

Speaking of the 50th Anniversary: Sherlock’s Mark Gatiss (himself an occasional Who writer and general all around fanboy) is penning a docudrama depicting the creation of the Doctor Who franchise called An Adventure in Time and Space. Ostensibly, this will not only explain how the show got started, but also require the casting of someone suitably fabulous to play First Doctor William Hartnell. Suggestions?

Rose Tyler was just voted the Greatest Woman of Doctor Who in a BBC America online poll. As you all will see once The Great Doctor Who Rewatch gets under way here, I am incapable of being unbiased about Rose, so I can make no comment here. What do you all think?

And, finally, this is maybe the greatest fan-created Doctor Who promo ever made. If someone doesn't actually get some TARDIS sauce made somehow after this, I'm going to be very disappointed.