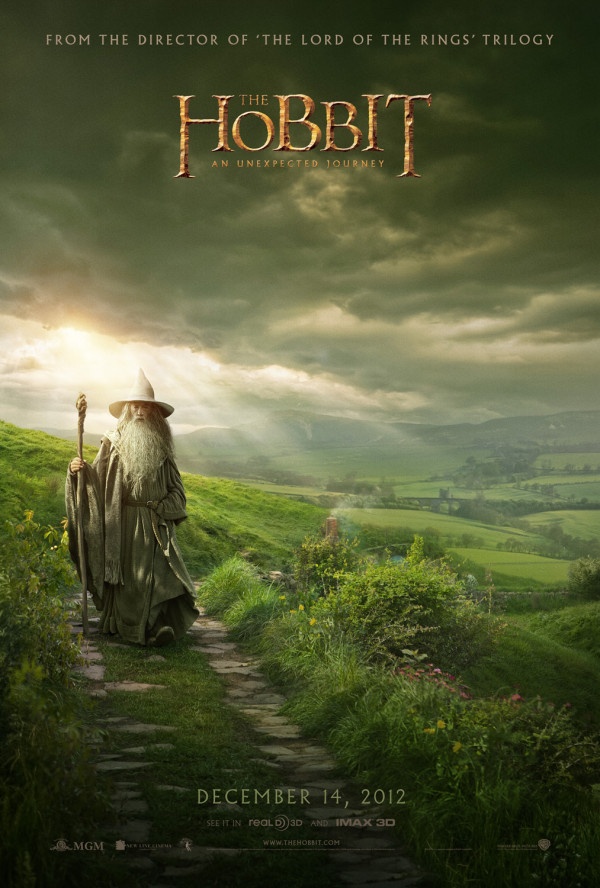 The other title of this post was basically, guys, I’ve seen twelve minutes of The Hobbit now, so please indulge my need to flail a little bit about this movie and hopefully it will also be relevant to some of your interests?

Peter Jackson’s The Hobbit is one of the most highly anticipated movie franchises of the next few years. The first installment, The Hobbit: An Unexpected Journey, will premiere on December 14, 2012 (coincidence that it’s my birthday? I think not!) with the second installment, The Hobbit: There and Back Again, slated to hit theaters a year later, and the recently announced third film coming…well, sometime after that.  I also wouldn’t count on that There and Back Again part of the second film’s title sticking for much longer now that we’re dealing with a trilogy either. (Sigh – I liked it!)

Based on J.R.R. Tolkien’s beloved fantasy novel of the same name, the film stars Sherlock’s Martin Freeman as Bilbo Baggins alongside the great Sir Ian McKellen as Gandalf the Grey, Robin Hood’s Richard Armitage as Thorin Oakenshield, Being Human’s Aidan Turner as Kili the dwarf, and Sherlock himself, Benedict Cumberbatch, as the voice of Smaug the dragon. Many cast members from Jackson’s Lord of the Rings trilogy are also returning including Andy Serkis, Cate Blanchett, Hugo Weaving, Orlando Bloom, Christopher Lee and Elijah Wood.

While The Hobbit now-trilogy isn’t strictly British entertainment, I figure with its British author, largely British cast, and the tremendous amount of crossover going on between this film and British shows we all love, it mostly counts. (Also, as you will be able to discern for yourselves momentarily, I’m kind of a big fan.) So, what’s the latest on all things Middle-Earth? What can we blame the fact that Sherlock Series 3 filming got pushed back on? And what’s up with this whole trilogy thing? Let's talk about it!

Gah, there is so much! Let me sum up:

I Love The Hobbit.  Fair warning, I am putting my biases out there straight away: The Hobbit was one of my absolute favorite books as a kid and, subsequently, I also grew up to love The Lord of the Rings trilogy and used several of Tolkien’s translations of the Gawain poet (he was a medievalist too!) in graduate  school. The word “fangirl” kind of does not begin to cover me in this instance, but I’m going to try to keep enough to look sane most of the really intense flailing inside.

The Hobbit Invades Comic Con: Or, Don’t Hate Me, But I’ve Seen 12 Minutes of It Now. The Hobbit’s Comic Con panel was my personal must-see event of SDCC this summer, so making sure I got to see it involved getting in line at 4 in the morning, sleeping on the sidewalk, and sitting through a day full of panels in Hall H that I had little to no interest in (Resident Evil sequel anyone? Snore.). At the last count I heard, over 11,000 people lined up to fill a space that could only hold 6,500. It was a bit insane. But, at the end of it all, it was so worth it.

The Comic Con panel featured Peter Jackson himself, along with Martin Freeman, Sir Ian McKellen, Andy Serkis, Richard Armitage, and special surprise guest Elijah Wood. They were all adorable and awesome and Martin Freeman wore a fedora. It’s so obvious that this project was a labor of love for Jackson, and everyone involved seemed to love being a part of the project. Even those in the crowd who got to participate in the Q&A – everyone basically prefaced their question with some form of love letter to the LOTR films, or the cast, or Jackson himself. It was fantastic.

Small Spoiler Alert: They showed us about twelve minutes worth of Hobbit goodness, from both the first and second films. Don’t want to be too spoiler-y about these, so I’m not going to do a line-by-line breakdown, but I will say this: Everything Jackson screened for the Comic Con audience looks glorious. We saw four distinct scenes and a lot of flashes of other things. Actual scenes shown: We saw Gandalf and the dwarves debating whether to take Bilbo on their journey and Bilbo reading the dwarf contract, Bilbo meeting Gollum and their decision to play riddles, Gandalf and Galadriel discussing why Bilbo was chosen for this quest, and Bilbo finding a very familiar-looking ring.  Then there were a ton of flashes of other things: elves, stone giants, huge trolls, Saruman, Legolas, Radagast the Brown, creepy caves, gorgeous scenery, more dwarves, Gandalf running through what I assume has to be Dol Guldur, Bard the Bowman, an incredible looking Laketown that was basically exactly how I had always seen it in my head. It looks perfect. I want to watch this movie right now.  End spoiler alert.

They also showed us some behind-the-scenes video from the last few days of principal photography (well, at least it was at the time, haha), which has since been turned into a video blog that everyone can watch, since they aren’t able to release the actual film clips for widespread distribution. Watch it. You’ll like it – there are glimpses of many great sets and characters.

By the end of all this, my face hurt from smiling. Also, I cried. It was amazing. I can’t wait for December. Thanks for what looks like the best birthday present ever, Peter Jackson.

The Hobbit: The Trilogy? About two weeks after Comic Con, Jackson and Warner Brothers officially announced that The Hobbit would be broken into three films rather than two.  Reactions to this news seem to fall into one of two camps: more hardcore Tolkien fans who would probably watch five Hobbit films if Jackson felt like making them, and those who are worried that trying to pry three movies worth of story out of a book that’s less than three hundred pages is indulgent at best, or blatant studio money grubbing, at worst.

While I’m sure you can guess which camp I fall into (I’m waiting on a twenty part adaptation of The Silmarillion really), the concerns expressed about The Hobbit getting as much film real estate as all three volumes of The Lord of the Rings are pretty fair.  It’s obvious that Jackson was planning to pad out some of the core story of The Hobbit with material found in Tolkein’s appendices and notes from The Lord of the Rings as evidenced by the inclusion of the Battle of Dol Guldur in the story already. Tolkien was tremendously prolific; there’s a large amount of story concerning the world of Middle Earth that never fully made it into any of his “proper” novels. Therefore, there’s hardly a lack of source material to be mined in this effort.

My personal prediction is that an expansion into a third film will basically allow Jackson to play out more of the rise of the Necromancer, the story of Dol Guldur and the Battle of the Five Armies (basically the non Bilbo-specific plots) in a way that will make the third movie a bridge film to The Fellowship of the Ring in some way or other.  I will be happy to gloat about this when I am proven right in 2014 – or be very upset if I’m wrong! Besides, isn’t this really one of those scenarios where it’s impossible to have too much of a good thing? In theory, the additional filming is supposed to only take a couple of months in New Zealand next summer, according to Internet gossip, so it shouldn't have any effect on Sherlock Series 3 filming, which is slated to take place at the beginning of 2013. So, we should all be happy!