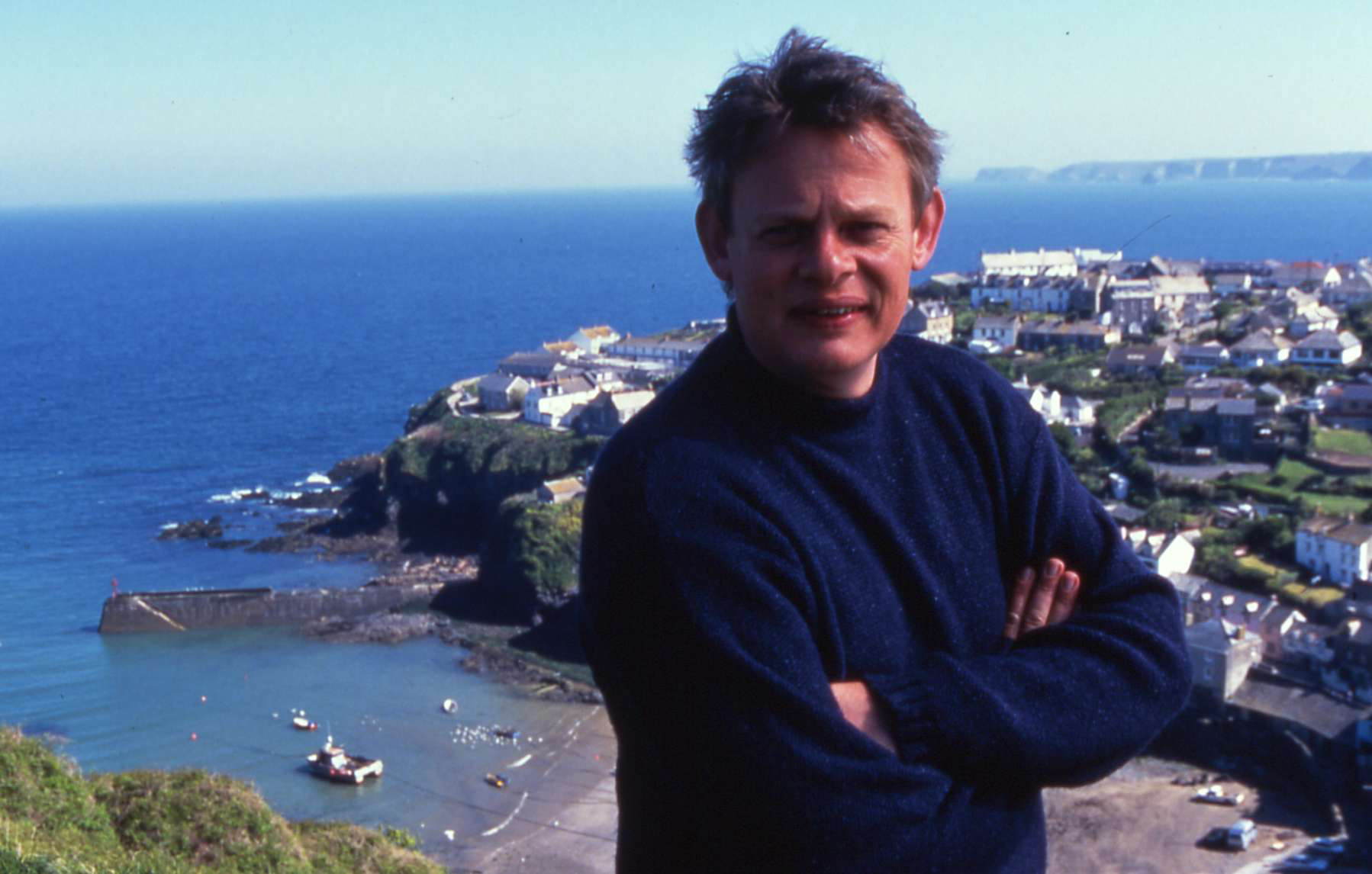 Housekeeping note: Technical issues waylaid the Friday News Roundup yesterday. (Hurray, storms!) It’ll be back next week. Hope everyone in the DC metro area is safe and sound – and staying cool!

Before Doc Martin the series existed, the character that would become Martin Ellingham made his first appearance in a 2000 film called Saving Grace. Thanks to the success of this film, two made-for-TV prequels were made, both featuring Martin Clunes playing the doctor who was then known as Martin Bamford. The character is a bit (lot?) different, the villagers aren’t the same, and the town’s called something else, but you can still see a few similarities to the show we all enjoy so much.

We just aired the first of these – called, simply, Doc Martin: The Movie –last weekend, and I thought it might be fun to try and dig into a little bit – both on its own merits and how it stacks up against Doc Martin: The Series. Plus, I’ll be honest, I’m missing the Great Doc Martin Rewatch and its fabulous discussion threads, and I’m already feeling cranky about the fact that they don’t even start filming Series 6 until next year. (Why does being a TV fan involve so much waiting?)  So, please, indulge me.

Click through and come chat with me about Doc Martin: The Movie and, as always, feel free to leave your thoughts, favorite moments, funny lines, general rants, whatever, in the comments.

This movie was not exactly what I expected. On the whole, I found it generally sweet and mostly fun to watch, but also sort of forgettable, if that makes sense.

The Plot. Doctor Martin Bamford discovers that his wife has been cheating on him – with not just one, but three of what apparently are his best friends – and flees to a small village in Cornwall to get away from it all. (I love the fact that the town he escapes to is Port Isaac, which is the real name of the town that stands in for Portwenn on the series!)  As is often the case in these sorts of stories, Martin immediately befriends some of the local residents, including Harvey the fisherman and Rita, a young woman with an ill child. He also gets sucked in to the ongoing village drama, and is almost immediately suspected of being the “jelly bandit” who has been terrorizing the town by documenting the neighbors in compromising positions and embarrassing them by revealing their secrets via horrifically vibrant jelly molds with photos hidden inside. Meanwhile, Martin must figure out what he wants from his future, both personally and professionally.

Confession time: I was a bit bored by the technical “plot” of this movie. Don’t get me wrong, I enjoyed all the character things – seeing the shambles of Martin’s personal life, meeting his awful wife (Louisa is a total relationship upgrade), getting to know the locals, even learning about fishing – but the actual overarching “Jellymaker” mystery, was a bit over the top for me. And that’s even before we get to the bit where the shaming-via-brightly-colored-food product was being committed by the town vicar dressed in drag. Allrighty, then.

I wasn’t tremendously interesting in the mystery plot in the first place, but it’s still nice to know that even during the television series’ most irritatingly wacky medical plots, I was never actually bored. Comforting? Oddly, it is a bit. This story strikes the same sort of quirky notes we’ve come to expect from Doc Martin, generally, but it didn’t really have a lot of tension or suspense. (We all knew the town was wrong for suspecting Martin, and if you’ve basically ever watched TV ever, you knew the culprit wasn’t Rita.)  Possibly this reaction is because “poison pen” plots have never really been of much interest to me, but there’s something to be said for the fact that the stakes in this mystery never really felt particularly high, even if watching various townsfolk get humiliated was occasionally amusing.

The “New” Locals. While I will admit to a soft spot for Harvey (and his very sweet friendship with Martin), give me the Portwennians any day. I missed the Large boys a surprising amount!

This Martin Versus “Our” Martin. There’s a lot that changed between these films and the creation of the TV series, which is apparent in the huge differences in this earlier version of Martin. In Doc Martin: The Movie, Martin is an obstetrician who drinks, smokes and does what appears to be pot at one point. He flees to the wilds of Cornwall because he’s so upset over his wife’s infidelity, he gets drunk, he makes new friends, he likes children, he is mostly charming and people like him. Yes, he is most certainly a fair bit removed from the character we’re used to watching every week.

Apparently, the original deal was for Sky Pictures to produce two of these TV films featuring “Martin Bamford” every couple of years, but the company folded after the first two were completed, so Clunes’ company tried to sell the project to ITV (who eventually did take it on). The story goes that the network wanted the Martin character to have more of a “fish out of water” vibe and be less comfortable in the country, which explains Martin’s changed relationship with the village he ends up in. The childhood connection is still there through Aunt Joan, but TV!Martin certainly has none of the fondness for Portwenn that his predecessor has for Port Isaac. ITV also apparently wanted the television series to have a more edgy feel, and apparently it was Clunes himself who came up with the idea to make the “new” Martin grumpy and socially inept.

There is a lot in the performance of Martin Bamford that’s similar to Martin Ellingham, if not so much in the script, though I think that’s as much to do with Clunes’ abilities as an actor as anything else. Yet, unexpectedly, I find myself oddly preferring our crotchety, emotionally stunted TV series version in the end – but I do wonder if my feelings would be the same had I seen this take on the character first, or even earlier in my first run through the show itself. There’s a lot to like about this Martin and it certainly shows that Clunes can be a quite charming lead when given the chance. To be fair, as much as Martin Ellingham sometimes frustrates me no end (as I’ve gone on at some length about here in the past),  I think he’s a more interesting character than this earlier incarnation. He certainly has more depth, even if we aren’t frequently given the opportunity to explore what makes him tick in very great detail.

Which Version is Better? Do I wish that they’d kept some of the character traits from this original version of our good doctor? In short: yes, a bit. I like this more multi-faceted Martin who has a much wider range of reactions to things and doesn’t seem to be constantly stuck on an emotional setting of either “grumpy” or “mean.” I like he wears his feelings on his sleeve a bit more obviously and we don’t have to speculate or theorize about how some particular incident must be making him feel without any onscreen evidence behind it. And I really like that even in this short time frame we get to see him develop relationships with the secondary characters that feel real, and I desperately wish that this was something I ever thought the series would allow his character to experience. (I feel like I should get that on a t-shirt: Martin needs a friend!)  There are also moments where I quite like the gentler, more whimsical feel of this film, even though I wonder if an entire series featuring that sort of saccharine tone wouldn’t eventually start to feel staid and cloying. But, there’s a lot that’s good about this prequel (horrifying jelly story aside).

However, watching this movie does make you appreciate the fact that Martin’s character on the TV series has a bit of a bite to it – this is probably also why, for me, the series is far funnier. In some ways, I wonder if Movie!Martin’s characterization doesn’t suffer from some of the same problems as the series version, just sort of from the other direction. This Martin is mostly really nice. He helps sick kids. He helps solves mysteries. The people in the town who don’t like him because he’s an outsider come to respect him because he basically does good deeds all over the place. Yet, the character has less depth than his series counterpart. Other than, really, why on earth would he have ever wanted to go back to dreadful Petronella in the first place, I don’t feel like there’s a lot more that I need to know about how his character functions.

TV!Martin is much more complicated and layered. While that’s often supremely frustrating for viewers on the occasions when his character seems stuck in a perpetual “one step forward, two steps back” cycle of storyline development, it’s also what keeps us coming back to the show. It’s why we care about the character. Movie!Martin seems a nice enough chap, but his motivations are fairly simple ones on the whole. He’s out of his element in Port Isaac, but only because the setting is unfamiliar, not because it’s completely alien to him. TV!Martin, on the other hand, comes off as completely out of his depth in almost every way possible socially and professionally. Yet, that’s what makes us root for him, precisely because he’s so very flawed. Even if I wouldn’t necessarily mind a sort of hybrid version that was a bit kinder to people and had motivations/emotional responses that were easier to understand.

What do you think, Doc Martin fans? If you’ve seen the prequel films, how did you like them?