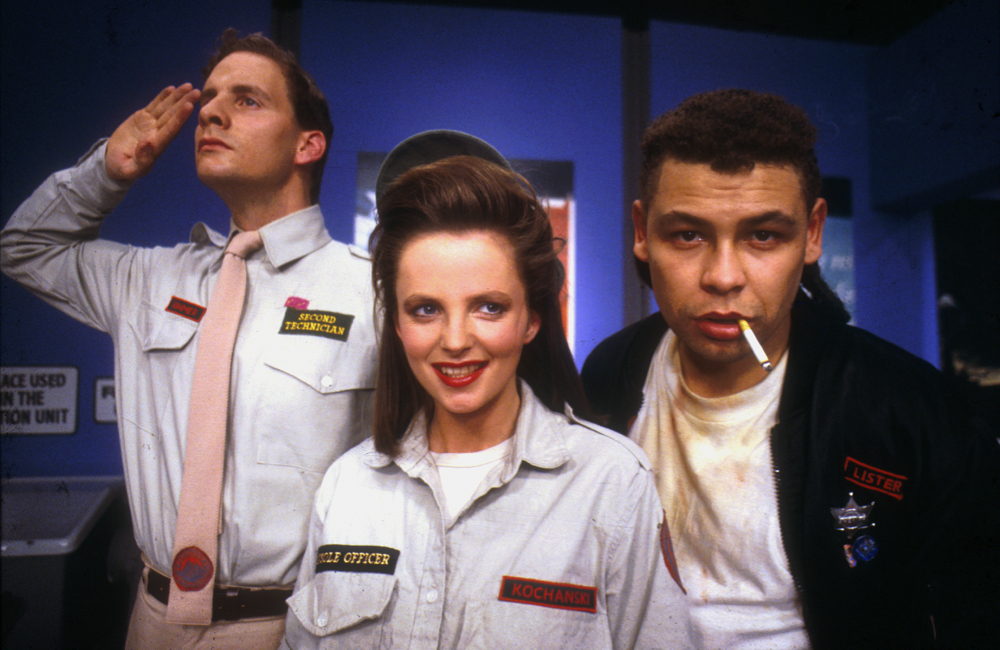 Up next in our series of little mini-introductions to some of the great programming you can expect to see on WETA UK, the cult classic science fiction comedy Red Dwarf.  The franchise primarily comprises eight series plus a smaller ninth mini-series type thing named Back to Earth. Red Dwarf originally aired on BBC Two between 1988 and 1999 and then on Dave in 2009. The show has had such enduring popularity that a tenth series was recently commissioned and is set to air on Dave later this year, actually.

This is actually one of the WETA UK programs that I personally am most excited about, because I’ve never seen it and everyone I know that’s watched it just loves it to death. I tend to enjoy sci-fi, as a rule, and while I am slightly…well, the concept seems very hard to explain/get your head around, but I must admit I’m intrigued. Click through for some basics and a look at Series 1.

This is on the short list for things to do weekly reviews for at some point this summer, so speak up if that's something you'd be particularly interested in seeing!

What is This Show Called: Red Dwarf

What Kind of Show is It: Science fiction comedy/sitcom

Who is in the Cast:  The main cast of Chris Barrie, Craig Charles, and Danny John-Jules was joined by several other folks over the series’ run, including Robert Llewellyn, Norman Lovett, Hattie Hayridge and more.

What is it About: I’m just going to tell you what the official Red Dwarf site has to say in their "About" section, because I feel ill-equipped to explain this myself:

On the mining ship Red Dwarf, professional slob Dave Lister works as a technician with his immediate superior and bunkmate, the officious Arnold Rimmer. To say that Rimmer and Lister don't get on would be like saying that high doses of radiation aren't entirely good for you. Quite a coincidence, then, that a radiation leak picks this moment to wipe out Red Dwarf's crew.

Having smuggled his pregnant pet cat onto the ship, Lister is imprisoned in stasis - suspended animation - and so has no idea that his crew-mates, including love interest Kristine Kochanski, are being blasted into sherbet.

Lister is woken three million years later. Holly, the ship's computer, redirected the ship out of the solar system as soon as the accident happened, and then had to wait for the radiation to reach a safe background level.

To keep Lister company Holly resurrects Rimmer as a hologram. He can't touch anything, but he's as irritating as ever.

To everyone's surprise the team is soon joined by a humanoid animal evolved from Lister's pet cat. The shallow, self-involved creature is cleverly named 'Cat'.

After a year or so of drifting back through space, beginning the three million year journey home, the crew encounter Kryten - a servile mechanoid who thinks the phrase "Cleanliness is next to godliness" understates the importance of cleanliness.

In the following years Holly changes his gender from male to female (and back again), the crew misplace Red Dwarf and spend some time stranded on the small transport vehicle Starbug, Rimmer leaves to become an inter-dimensional space hero, a version of Kochanski appears from another dimension and, eventually, the entire crew of Red Dwarf are resurrected by nanobots. And if you think that sounds complicated, just be glad we didn't get started on all the time-travel stuff that goes on...

Why is It Awesome: I’m taking it on faith that this show’s awesome. Everyone I know that’s seen it seems to think so, and is convinced that I will also love it. Sure, it sounds a bit odd, but certainly no more so than a lot of other things I watch regularly already (Misfits, The Fades, Being Human, I am looking at you). So I’m excited to try it out for myself. I love sci fi, as a general rule, and the clips I've seen to date are hilarious.

How Can I Learn More About It: The below is a brief trailer for Series 1 that sort of explains the set up and characters of the show. Sort of. I have had one of my colleagues – who is a big Red Dwarf fan explain this to me – and I still don’t quite get it. But, it’ll give you a feel for it, at least.

How about you all? Do we have any big Red Dwarf fans out there already? Or anyone else who is looking forward to the chance to give this show a try next month?