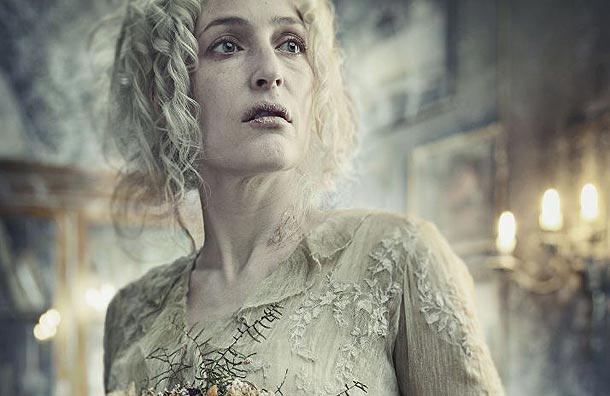 Masterpiece Classic’s newest adaptation of Charles Dickens Great Expectations concluded this past Sunday night. Much like the drama’s first installment, the conclusion is a bit of a mixed bag – several really fantastic performances from the cast, beautiful imagery, a few interesting departures from the source material, and a story that occasionally felt too heavy on the plot specifics and too light on the emotional payoff.

So click through, and let’s talk about it. If you still need to catch up, you can watch both episodes online right now! (And then come talk about it.)

Unfortunately, Some of This Story is a Bit Paint by Numbers. Possibly this is the ultimate problem for any Dickens adaptation that tries to condense his complicated characters and complex stories into a three-hour timeframe, but the pacing of this particular Great Expectations leaves something to be desired. While it’s necessary to spend a certain amount of time on Pip’s childhood - we’ve got character relationships to set up and a complicated storyline to the lay groundwork for –the unfortunate outcome of so much focus on the period before Pip grows up is that when we get to the part of the story where things really start cracking along, we’ve got to rush through a lot of moments that really deserved more screentime than they were given.

Frankly, I did enjoy Part Two of Great Expectations ever so much more than Part One – our cast of characters is more varied, more interesting things are happening, our protagonists are older and generally more interesting and we’re given the opportunity to see different groups of people interact that the more limited setting of Part One doesn’t have the room to accomodate.  Montages are used to great effect (loved the bit where Herbert Pocket teaching Pip to dance is used as the mechanism by which we measure the time of his “gentleman training” passing by), but as viewers we’re still left with a vague feeling that we must have missed out on quite a bit as we careen from Important Moment to Important Moment.  We tick off all the Dickens Plot Boxes, but other than Estella and Magwitch, there's not a lot of real emotion to be found.

It’s Estella That’s the Really Interesting One. On some level, I’ve often thought that Great Expectations would be so much more interesting if this were Estella’s story, rather than Pip’s. One of the things this adaptation actually does very well is make Estella believably complex, and Vanessa Kirby deserves kudos for walking the fine line between sympathetic and hateful without tipping too far in either direction. This is a character that is often very hard to like, but her Estella is interesting – proper, reserved, and positively seething with a palpable undercurrent of rage in every scene she’s in. From her first appearance in Part Two, with her seemingly throwaway comment to Pip describing her lodging situation in London as “One more stranger who has the charge of me,” to her furious declaration to Miss Havisham that she has no heart and is only what her mother has made her, she is somehow the only character that carries a sense of the unpredictable about her, that she carries so much fury around inside her everyday that, well, you just never know.

That entire sequence with Miss Havisham in which Estella declares “I am your blade,” basically acknowledging that her purpose in life is to be sent out into the world as some sort of man-destroying heat-seeking missile, was chilling. I suppose in a more modern day sort of story – Estella would end up as some kind of CW or USA drama heroine whose secret mission would involve going around with various aliases or colorful wigs and punishing wrongdoing men for their shady treatment of women. So perhaps in some ways, she was just a bit ahead of her time?  She’s the only character in this production that I really wish we could spend some more time with – we get small moments of her POV, but nothing terribly substantial and that is just such a shame.

It’s Hard to Know How To How to Feel About Pip. The small glimpses of Estella’s inner life are substantive enough for us to figure out the basic gist of her motivations, tantalizing enough that want to know more about what makes her tick and linear enough that they create some semblance of a story arc for her. (Her level of agency in her own life is questionable, but, nevertheless, it’s easy to follow the trajectory of her character.)  Unfortunately, Pip faces a slightly different sort of problem. We know that Pip is a basically good person – Magwitch himself says that he decided to give the boy a fortune simply because he was kind – and we see his character slowly become less likeable as the story goes on, before he comes back to himself at the end. Unfortunately, this Pip often comes off as a character who is doing things simply because they’re items to be checked off on a list entitled “How the Plot Progresses.”  He’s sweet, selfish, rude, generous and remorseful when the plot demands it, but we don’t see much of the internal development that would give these emotional beats more heft. There’s no real distinction between the Pip who secretly funds a job for his best friend so that he can get married and the Pip who ditches his sister’s wake to take Estella to a party (why is he capable of both those things?). We get very little sense of his internal perspective on anything (other than OMG, I love Estella!), and no real linear progression of his character. He does things, apparently, because he is supposed to do them and only seems to find any shred of personality at the very end when he becomes the sort of boy you thought his younger self would be.

Well Played, Gillian Anderson. There is not nearly enough Miss Havisham in this episode, though Gillian Anderson certainly made her handful of appaerances really count. The dual imagery used in all her scenes is beautiful, and simultaneously showcasing the decay of both Satis House (Vines! Growing in the ceiling!) and Miss Havisham herself – the filthy dress that’s falling apart, her increasingly tangled hair, her deteriorating grasp of reality – was exceptionally compelling.  Anderson plays the downward spiral of Miss Havisham with a wonderful mix of sadness and crazed melodramatic glee, and by the time we get to the part where Estella the Elder lights herself on fire using the tattered remnants of her letter collection, well. Let’s just say that while this is not at all what happens to her in the novel (Miss Havisham’s dress does catch on fire, and she does die, but not like that), it makes a certain sort of sense here and doesn't seem nearly as wrong as it probably ought to.

There are Some Awesome Secondary Characters, Though. Possibly because this version of Pip is difficult to really care about, the set of secondary characters in this adaptation seems to shine that much more brightly. (One of my favorite things about it, in fact.) Magwitch is somehow exceptionally creepy, yet surprisingly warm and sympathetic – a sort of gruff, possibly murderous Santa Claus. It’s something when your protagonist actually looks like a jerk for being rude to a guy who might have killed someone, right?  Mr. Jaggers is given both great lines and complicated layers. And Herbert Pocket is basically made of adorable and the good, kindhearted person we all know that Pip ought to be all the time.  The entire supporting cast of this production really is top notch – but it’s really Ray Winstone that struck me as the standout, though David Suchet does a lot with a little in his role.

And Then There’s The Ending: Um, Okay.  In our rush to tie up all the lose ends, our story’s conclusion becomes ridiculously soapy and over the top, simply by virtue of all the plot we’ve got to cram into it. In the space of twenty minutes, everything ever apparently happens: Estella’s husband is trampled to death by a horse, Pip discovers Estella is the daughter of Magwitch and Mr. Jaggers’ housekeeper/girlfriend, Magwitch and Pip try to flee London by river, only to be caught by Denby at the last second, Magwitch kills Denby and is nearly beaten to death, Pip’s fortune is confiscated by the crown, Magwitch dies in prison, Pip returns to the forge and makes up with Joe, Estella moves back in to Satis House, Pip and Estella are reunited and hold hands as dramatic music swells. Whew. Not that the ending isn’t exciting, it’s just. so. rushed. And – though this is, admittedly, a problem I’ve always had with the source text as well – nothing about this story seems primed for a happy ending, yet that’s basically what we end up with. I remember from English class that the original ending to Great Expectations was a bit darker and less neatly wrapped up (Estella remarries but it’s not Pip) , and I think that this adaptation in particular might have benefitted from being edgy enough to go with that one.