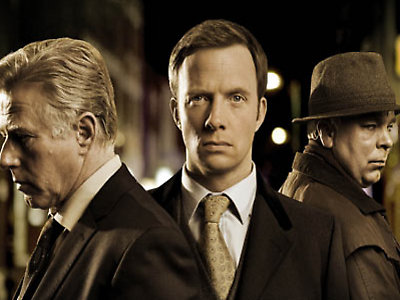 Crime drama Whitechapel recently concluded its third season run in the UK, but Americans won’t have to wait very long to see the series’ new cases for themselves. BBC America has announced that Series 3 will premiere on the cable network as part of their Wednesday night “Dramaville” block starting on March 28.

If you’ve never seen Whitechapel before, it’s an extremely well put together crime series that features modern-day murder cases which are “inspired” by famous cases of the past and played out over multiple episodes. (Series 1 was Jack the Ripper and Series 2 was the Kray twins.) The format of Series 3 has undergone a bit of a shakeup – now we’re getting six episodes split into three two-part stories, rather than one single mystery spread over three episodes. Bit of an adjustment, but the quality of this show is so high that I think that giving them more episodes to work with can only lead to good things.

Click through for a look at BBC America’s new trailer, which gives us a pretty good idea of what sorts of cases Series 3 will focus on (read: still extremely creepy and scary).

Stars Rupert Perry-Jones, Phil Davis and Steve Pemberton are all back as DI Joseph Chandler, DS Ray Miles, and historian (of a sort) Edward Buchan. I’m intrigued to see whether they keep the mostly “based on historical incidents” framework for all the mysteries this season and, if so, what crimes or criminals they choose to use as inspiration. Does anything in the trailer look familiar to you?