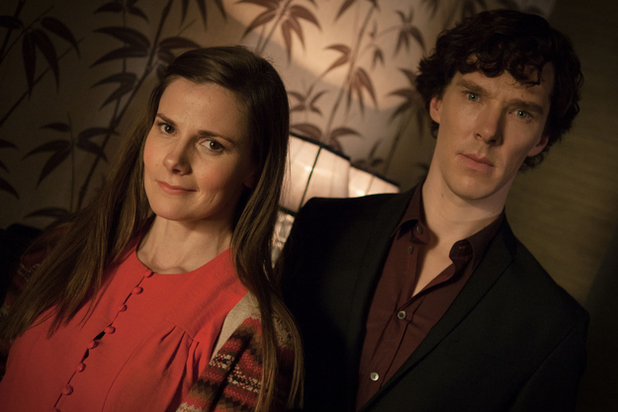 Benedict Cumberbatch and Louise Brealey in "Sherlock". (Photo: BBC)
For those who are busy missing Sherlock – which, it seems, is most likely everyone – here’s a little something to help you get through the long days until, well, whenever the special gets here.

Stars Benedict Cumberbatch and Louise Brealey recently recorded My Dear Bessie, an audio adaptation of a series of World War II love letters written by a soldier in Cairo named Chris Barker and Morse code interpreter Bessie Moore. The two – who vaguely knew each other – stumbled into a correspondence that rapidly turned into a love affair.

The letters first appeared in British journalist Simon Garfield’s book To the Letter, which was released on Valentine’s Day 2015. More than 500 letters between Chris and Bessie survive – although apparently many of Bessie’s were burned to save space – and they’re awfully swoony and romantic. It’ll make you wonder why nobody writes letters anymore – they’re beautiful, in addition to being important historical snapshots.

Turns out Sherlock duo is actually quite familiar with this material: Cumberbatch has read a selection of these letters before at the Hay Literary Festival back in 2014, and the two co-stars  read excerpts during the recent Letters Live event in London, which celebrated the enduring power of literary correspondence.

Listen to an excerpt here:

The entire 45 minute episode can be streamed for free – globally – from the BBC Radio 4 website until May 20, so you have the better part of a month to fit it in.  Or, if you’re feeling ambitious and act before May 7, you can actually download My Dear Bessie as part of BBC Radio 4’s “Drama of the Week” podcast series. Enjoy!