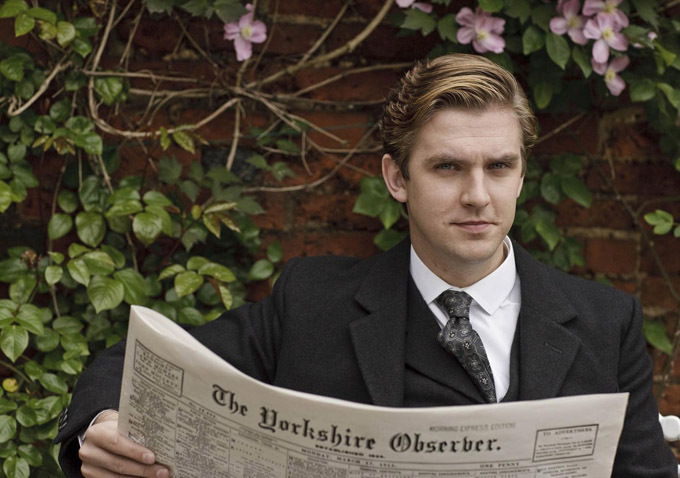 Dan Stevens as swoon-worthy Matthew Crawley in "Downton Abbey" (Photo: ITV)
Have you been missing Dan Stevens being all dreamy and perfect on Downton Abbey? Okay, maybe you haven't been missing him THAT much, given that he's kept himself pretty busy with a variety of film roles The Guest, A Walk Among the Tombstones, Night at the Museum) and even a bit of stage work (The Heiress) since leaving HIghclere Castle behind. But, that's okay, because he's just landed the dream role we have all known he was perfect for since way back when Downton first began - an actual Disney prince!

According to The Hollywood Reporter, Stevens has officially been cast to play the Beast in Disney's upcoming live adaptation of the Oscar-nominated animated classic Beauty and the Beast. He will star opposite Brit Emma Watson, who was cast as Belle several weeks ago. (Rumor has it that another up and coming British thespian - Luke Evans - is in talks to take on the role of the nefarious Gaston, but that hasn't been confirmed quite yet.

Stevens is not the only Downton alum to join the ranks of Disney fairytale characters. Lily James - otherwise known as the spirited, clever and generally fantastic Cousin Rose - is playing the titular role in the about-to-be-released live action adaptaion of Cinderella slated to release this March.

There has been no offical word about whether this live action version of Beauty and the Beast will be a musical or not - but Watson's mention of taking singing lessons on her Facebook page seems to hint that we will all end up humming along to "Be Our Guest" again in theaters next year.

Who's excited about the prospect of Dan Stevens singing? Because I know I am. (He honestly seems so perefect for this part - the only downside is how much of the movie he's going to have to spend in a Beast suit. Sadness!)

What do you think? Is Stevens enough of a fairytale for you? Or would you rather the Beast stay strictly animated?