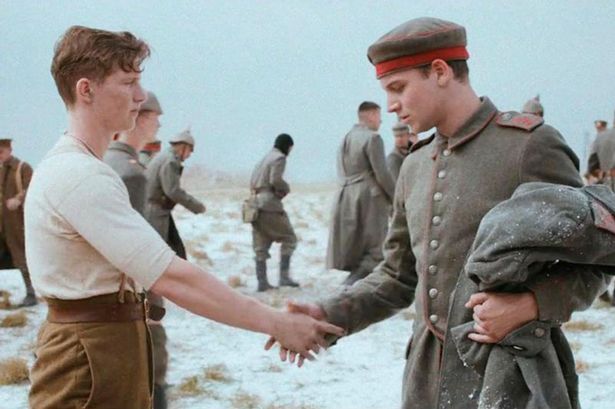 Remember this adorable, sniffle-inducing John Lewis holiday advert featuring a boy, his penguin and a lesson on the meaning of friendship? Remember how it seemed like there was no way that any other Christmas commercial could possibly top its heartwarming perfection?

Well, it turns out that prediction might have been a bit premature. It would seem that UK supermarket chain  Sainsbury’s has decided to also go for the emotional jugular this year, with an five-Kleenex-alarm holiday ad built around the Christmas Truce of 1914 , a series of unofficial cessations of hostilities that occurred along portions of the Western Front during World War I. German and Allied soldiers, hearing Christmas hymns being sung, both stepped out of the trenches and met in no man’s land that day to exchange gifts, take pictures, sing hymns and, supposedly, play football (soccer, to us Americans).

Fair warning: You probably want to make sure you have some tissues handy before you push play.

The ad has been somewhat controversial in the UK – raising questions about whether it’s ever okay to use the idea of war for commercial purpose, and whether it’s tasteful or callous to specifically depict trench warfare in this way. As an American, I don’t feel particularly knowledgeable enough on this issue to weigh in on either side, but here’s what I do know: this ad made me cry. Kind of a lot. It is, regardless of its problematic aspects, quite beautiful, and its overall message is something worthwhile, I think.

You take a behind-the-scenes look at the Sainsbury’s spot, and learn about the store’s partnership with the British Royal Legion, on their website.

Though I don’t think I’ll be watching this nearly as much as the penguin one. Just saying.

What do you think of the Sainsbury’s spot? Do you think American stores produce holiday commercials like this? I tried to think of some similar examples and blanked.