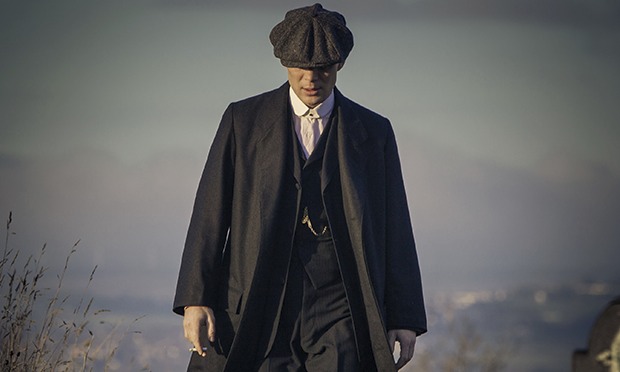 Just imagine this "Peaky Blinders" powerwalk is in slow motion. (Photo: BBC)
Netflix – one of my new favorite homes for British television these days – just dropped the second series of buzzy drama Peaky Blinders, a period crime piece which follows the story of a notorious gang whose members were known for sewing razor blades into the brims of their hats. Sound weird? Maybe a little bit. But this show just works, and I can’t wait to see what’s in store in Series 2.

If you haven’t tried Series 1 yet… well, you definitely need to give it a look. The show is full of interesting characters, fantastic performances, and a well put together story that’s a great ride from start to finish.

But why watch it, really? Here are five reasons that Peaky Blinders is worth your time:

In Short: Cillian Murphy! Murphy, who has had major roles in megahit films like Batman Begins, 28 Days Later and Inception, is pretty amazing as the Peaky Blinders' leader Thomas Shelby, and his performance is reason enough to at least give the show a try. An excellent mix of sensitive, thoughtful and terrifying, Murphy makes Shelby into something more than just a gangster. Instead, he plays him instead as a young man haunted by his experiences in the First World War, who is utterly dedicated to his family and determined that they are all going to rise in society, together.  He's ambitious and loyal, and determined to turn the family business into a legitimate enterprise. Yeah, sometimes he makes epically poor decisions, suffers from a fairly bad case of PTSD and is kiiiind of violent, but you'll still find yourself rooting for him anyway. And that's because of the compelling nature of Murphy's performance.

Awesome Ladies Doing Awesome Lady Things.  For a show that’s ostensibly hyper-focused on gangster-type dudes beating the crap out of each other, there are a TON of great female characters in Peaky Blinders. The ringleader of this lady crew is Helen McCrory’s truly tremendous Aunt Polly, the badass older lady responsible for keeping the Shelby business world running while all the lads were off in France fighting the war, but she is far from the only sister doing it for herself on this show.

There’s also Grace (played by Annabelle Wallis), an undercover detective who’s perfectly capable of handling her own cases, catching her own criminals and shooting at anyone who gets in her way. Ostensibly, this character should be nothing more than the standard “love interest,” but she’s just as complicated and compelling as any of the Shelby clan. And there’s Ada Shelby (played by The Bletchley Circle’s Sophie Rundle), the lone girl in a family of gangster boys who must try to find her way within the family business and without. She’s feisty and opinionated and allowed to be selfish and unlikeable, which is far too often rare on shows like this.

It’s Got Style. A lot of reviewers referred to Peaky Blinders as sort of a British Boardwalk Empire when it first premiered – the comparisons practically write themselves – but, in my opinion, the British offering presents its gangster story with a lot more flair. It’s certainly more exciting to watch most of the time – Season 3 of Empire felt like it took about seven years to pass, is all I’m saying – and headwriter Steven Knight has a knack for the dramatic, making life in Birmingham feel more like the Wild West than a boring, industrial British city.

The visuals are swoon-worthy as well: Yes, the show occasionally relies a bit too heavily on slow-motion shots during action sequences, but the bold colors and dramatic camera angles make the period drama feel altogether like something new. It’s all dirty backdrops and ash falling like snow, and gorgeous bright accent moments like the bright red “powder trick” used in the first episode that will hook you instantly. Peaky Blinders has a definite “look” – a bit Parade’s End crossed with Penny Dreadful – and a spectacle feel. It’s British TV with a twist – and that’s worth watching.

Also: Wow, This Soundtrack! In another artistic choice that should not work at all, but just does, Peaky Blinders isn’t scored with anything that even existed during the post-WWI era. The show embraces contemporary music and recognizable pop hits – using music from artists such as Nick Cave and the Bad Seeds, the White Stripes and Tom Waits to great effect.  I am never going to hear that “Red Right Hand” song without thinking of this show ever again.

Surprise, There’s Actual Heart Here. While Peaky Blinders is ostensibly about a violent family looking to move up in the world by way of manipulating and/or beating the crap out of people who go against them, the characters are all so well drawn that you can’t help but relate to and sympathize with them. The Shelbys all clearly adore each other and even the more irritating members of the family (i.e. Arthur and/or Ada at various points) turn out to have unexpected depths and are capable of being really awesome in their own ways.  The whole family is simultaneously flawed and raw and, yes, sometimes awful, but you’re still more likely than not going to end up rooting for the supposed “bad guys” in the end. Even the love story – which in some ways is a bit predictable, of course the undercover cop develops romantic feelings for the gangland leader – feels very real and earned. There’s just so much depth to every relationship, which is consistently built upon from episode to episode. #TeamShelby

Season 1 of Peaky Blinders is already available to stream on Netflix and Season 2 drops today (November 14). Go give it a whirl – you’ll be glad you did.

If you’re already a fan of Peaky Blinders, would you recommend the series to a friend? How would you get them hooked?

Peaky Blinders Why You Should Watch Recommendations Netflix