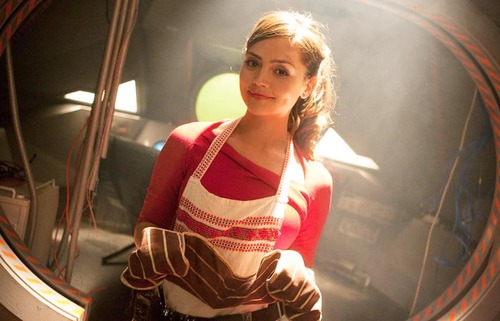 Jenna Coleman as Clara's first incarnation Oswin. (Photo: BBC)
Just as iconic sci-fi series Doctor Who is set to begin a new era with the arrival of Peter Capaldi as the Twelfth Doctor, rumor has it that more change may soon be in store for the megahit show: We might be in for a new companion by the end of the year.

The internet is buzzing with reports that current companion Jenna Coleman has decided to officially exit the TARDIS by the end of the year.

Originally reported by The Mirror, Coleman is said to be departing her role as Clara Oswin Oswald this Christmas. Whether this “Christmas” exit means that the actress is set to bow out during the drama’s annual holiday special or whether her run will end with the close of Series 8 is unclear. But, the paper has something of a track record of reporting Who rumors that eventually turn out to be fact.

“It was very much a mutual decision,” an anonymous source told the Mirror.

“It’s important to keep the series moving and fast-paced, and the time is just starting to feel right and the feeling is that it could be a perfect Christmas storyline.”

Interestingly enough, the BBC itself declined to comment these rumors directly. “It’s speculation at this time,” a BBC spokeswoman told The Radio Times. “People will have to watch the series to see if she’s coming back or not.”

It’s not entirely surprising that the BBC wants to keep everyone’s focus on Capaldi’s debut as a brand new Doctor, but the fact that the corporation refuses to confirm or deny this casting rumbling does lend credence to the Mirror’s initial assertions. This scenario becomes even more believable when you consider that word of the departures of several major Doctor Who stars (Matt Smith, as well as Karen Gillen and Arthur Darvill) have leaked to papers well before their official announcements in recent years. So, if this report turns out to be true, it wouldn’t exactly be a groundbreaking twist.

Coleman first appeared on Doctor Who during the Series 7 opening episode Asylum of the Daleks as Oswin, before returning as a Victorian governess named Clara in the 2012 Christmas special, and becoming the Eleventh Doctor’s full-time companion as contemporary girl Clara Oswald. In terms of actual episode count, Coleman hasn’t actually been a companion for all that long, but due to the recent gaps between seasons, she’s actually been a part of the show for over two years. Her wanting to explore other options – given the fact that Who has a particularly grueling shooting schedule – is entirely understandable, if this is in fact true.

What say you, folks? Do you think Coleman will hand over her TARDIS key this year? And would you be sad to see her go? Sound off in the comments.