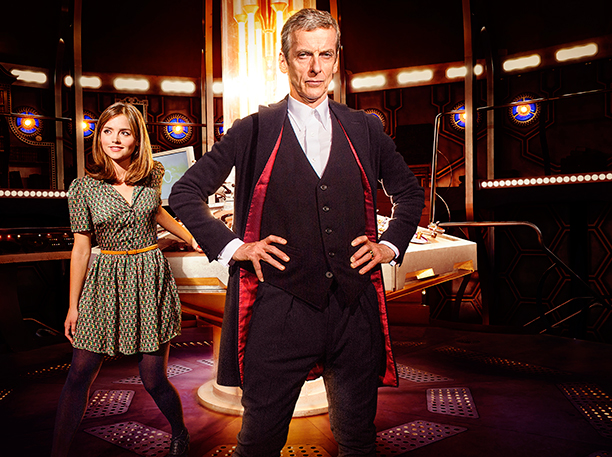 Peter Capaldi and Jenna Colman in the TARDIS (Photo: BBC)
Seriously, is it August 23, yet?

Another new teaser trailer for the upcoming eighth season of Doctor Who has arrived and while – yet again – it doesn’t feature anything that looks like actual episode footage,  it does raise an intriguing question about the sort of villains we’re likely to see once Series 8 gets underway.

The new clip is called Two Hearts, in reference to the Doctor’s unique biology and follows the pattern set by previous teasers by opening with several shots of the TARDIS on fire and electricity surging through Twelve’s body and illuminating his cardiac system.

So, yeah, not a lot that’s new to go on in this trailer, image wise, but make sure you play attention to the voiceover that’s playing during the footage.

Yeah that creepy voice in the background certainly sounds like it belongs to Davros, the slightly psychotic creator of the Daleks who was last seen battling David Tennant’s Tenth Doctor in the Series 4 finale Journey’s End.  Davros was assumed to have died when Ten and company left him behind as the Crucible self-destructed. But, of course, since this is Doctor Who – a show which has already resurrected the entire Dalek race multiple times – anything is possible.

And, of course, this could be all so much fan speculation, and this trailer could just be implying the (likely inevitable) return of the Daleks generally, but it’s pretty fun to imagine what a villain like Davros coming back might mean.

The previous Series 8 teaser trailer featured the debut of Capaldi’s Doctor – and a not at all subtle hint that Twelve may be a quite different sort of person than his predecessors, thanks to a worrisome voiceover from companion Clara.

The new season of Doctor Who begins on August 23 on both BBC One and BBC America.

What do you think, folks? Will we be seeing Davros again?