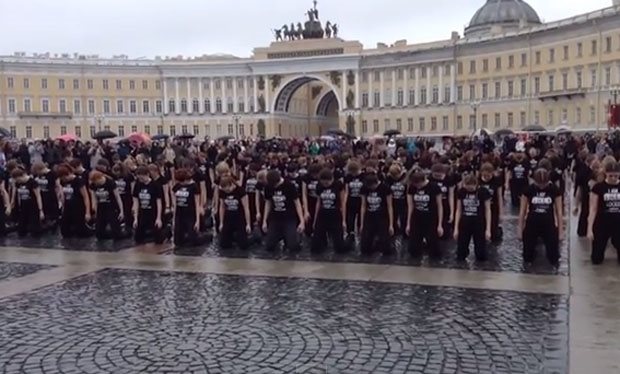 In case you needed further evidence that the Sherlock fandom is populated by some of the most creative and, frankly, fun people around, look no further than this new fan tribute from Russia.

Several hundred fans in St. Petersburg gathered to pay tribute to their favorite show, and since it’s 2014 now and it’s what people do because the internet exists, they put together an intricate dance routine and filmed it for YouTube.

And it’s awesome. Seriously, this will be one of the coolest things you see this week.

In theory, this is a flashmob, much like any other group of seemingly-random people who suddenly pop up to perform a synchronized dance routine something like The Sound of Music. However, these Sherlock fans take the flashmob concept and turn it right up to one hundred, creating a truly amazing tribute extravaganza that reenacts the major plot points from all three seasons. It features dancers dressed up as Sherlock, John, Moriarty, Irene Adler, and a lady in pink, along with piped in dialogue from the series itself,  a signature ringtone you’ll probably recognize, and several hundred Russian fans in “I am SHER-locked” shirts all getting down.

Bonus points for the fact that they actually worked in Rhianna’s We Found Love in a Hopeless Place, too.

Just watch it for yourselves, words can’t possibly do it justice:

Your move, other fandoms. Sherlock fans are for real.