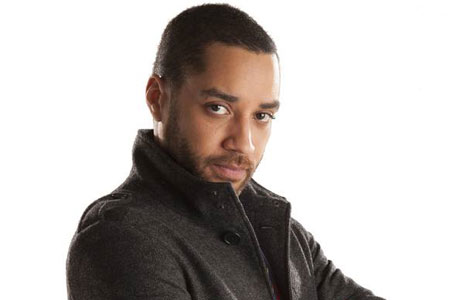 Meet new "Doctor Who" cast member Samuel Anderson (Photo: ©BBC WORLDWIDE)
It looks like Twelfth Doctor Peter Capaldi won’t be the only new face on our television screens when Doctor Who returns for Series 8 later this year.

The BBC has announced that actor Samuel Anderson will be joining the cast as “recurring character” Danny Pink, a teacher at Coal Hill Secondary School and colleague of companion Clara Oswald. Anderson has done quite a bit of British TV, including a stint on popular soap Emmerdale opposite current Who companion Jenna Coleman as well as roles in Gavin & Stacey and The History Boys.

“I was so excited to join Doctor Who I wanted to jump and click my heels, but I was scared I might not come down before filming started!,” Anderson said in a statement. “It’s a quintessential part of British culture and I can’t believe I’m part of it. It’s an honour to be able to work alongside Peter Capaldi and Jenna Coleman and I can’t wait to show people how my character becomes involved with such a fantastic duo!’

A rumor concerning the addition of a second Who companion has been circulating off and on since last December, and, while the original character named as the new addition in those reports is incorrect, there certainly does appear to be something to it now. Whether the addition of Danny is meant to finally help flesh out Clara’s character and personal life outside of the Doctor or whether he’ll serve as a love interest now that the Doctor is being played by an actor who’s got several decades on Coleman remains to be seen, of course. However, the two-companion dynamic worked well for Eleven, Amy and Rory, so there’s no reason the same couldn’t happen here.

Plus, the BBC’s playing things awfully close to the vest, referring to Danny merely as a “new recurring character” and not mentioning much about him beyond his job and giving no hint about whether we can expect him to end up running through space and time with Clara and the Doctor.

Showrunner Steven Moffat was also predictably cagey on the subject. “For the fourth time in Doctor Who history, Coal Hill School is coming to the aid of the TARDIS," he said. "In 1963 teachers Ian Chesterton and Barbara Wright accompanied the First Doctor. These days it’s the turn of Jenna Coleman as Clara Oswald. And very soon now, Sam Anderson as Danny Pink will be entering the world of the Doctor. But how and why? Answers are coming later this year in Peter Capaldi’s first series of Doctor Who!"

Translation: I’m pretty sure he’s a new regular companion, but if you want to bet against me I’ll owe you a coffee if I’m wrong.

There’s a certain nifty symmetry to this development as well, if you think about it – we have a new Doctor, armed with a fresh set of regenerations thanks to the Time Lords in The Time of the Doctor, and he’s apparently once again going to be travelling about with two teachers from Coal Hill School. Time is a flat circle, indeed, as that guy from True Detective would say.

But what does it all mean? No one has any idea. But it’s fun to speculate about while we count down the (many, many) days until the iconic sci-fi series’ Fall return.

Thoughts? Are you familiar with Anderson’s work at all? Would you rather have another new face in the TARDIS or is a new Doctor enough to be going on with for this season? Sound off in the comments.